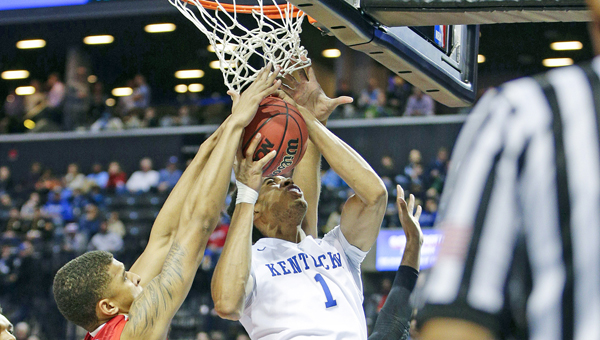 NEW YORK (AP) — The lead kept shrinking. It probably seemed like the clock wasn’t moving. Ohio State was playing No. 4 Kentucky at a neutral site but it sure didn’t sound that way.

The Buckeyes, who led by 16 points with 11:26 to play, appeared destined to be another opponent unable to hold a lead against the talented and deep Wildcats.

Ohio State, with all eight of its players scoring between six and 14 points, held off the furious rally — Kentucky got within three points — for a 74-67 victory Saturday in the CBS Sports Classic at Barclays Center.

“Just poise under pressure,” Ohio State’s Marc Loving said. “JaQuan (Lyle) and A.J. (Harris) really ran the show and we have to follow those guys. They handled the pressure the majority of the time.

“Being an underdog, we had nothing to lose. We had a chip on our shoulder from the beginning and we felt very, very prepared for this game and we executed our system.”

The Buckeyes (6-5) executed enough early to take a 37-25 halftime lead. The crowd of 16,311 was almost all in blue and they got very vocal as the rally went on. It was unfair to call this a neutral-site game.

“Just playing a team the caliber of Kentucky, everybody thinks you’re going to lose the game except for the guys in the locker room,” Loving said. “So just having that bond together and that tight knit group, made us be able to pull this victory out.

“It’s an awesome feeling to know that we played as hard as we possibly could and came out with the result that we wanted.”

Freshman Jamal Murray had a season-high 33 points for the Wildcats (9-2) and kept the rally going with 3-pointer after 3-pointer. He finished 7 of 9 from beyond the arc, all the makes in the second half.

A 3 by Alex Poythress brought Kentucky within 63-60 with 4 minutes to play and there weren’t many people in the building who didn’t think it was just a matter of time before the Wildcats would have the lead.

The Buckeyes, who had missed three of their last five free throws, suddenly started making them. Kam Williams made two and so did Daniel Giddens and the lead was back to 67-60 with 2:54 left.

Murray, with a 3 and a drive, got Kentucky within 4 twice but Jae’Sean Tate scored down low and there were three more free throws after Kentucky misses and Ohio State had the upset.

“We had two days to prepare for this and it was a little bit of a different game plan,” Ohio State coach Thad Matta said. “These guys did a tremendous job of understanding in a short period of time of what we were going to attempt to do. The fact that Murray got rolling today, that was one of the best performances I’ve seen in a short period of time. But the defense was definitely the key for us. We did not let our offense affect our defense when we had some tough stretches and that was big.”

Marcus Lee had 12 points and nine rebounds for the Wildcats.

“We still have to learn how to win. We didn’t start the game. They were the aggressor and they came after us,” Kentucky coach John Calipari said. “These guys have just played basketball in the past. Now we got to teach them how to win.

“We fought in the second half and did some good things but we’re a ways away. … Guys have beer muscles against us and they start making plays they don’t make all year. It’s just disappointing. I want them to be farther along than they are but we’re where we are right now.”

NEXT YEAR: The third edition of the CBS Sports Classic will be played next year in Las Vegas. The matchups will be North Carolina against Kentucky and Ohio State meeting UCLA. The inaugural Classic was held in Chicago.

Ohio State: The Buckeyes came in having won three of four with the loss at Connecticut. … Ohio State lost to North Carolina in last year’s CBS Sports Classic … Tate had six points and 10 rebounds. The Buckeyes finished with a 42-40 rebound advantage.

Kentucky: Calipari stays at 199 career wins at Kentucky. He is 199-40. … The two teams that have beaten Kentucky this season were in the building — Ohio State and UCLA, which lost to North Carolina in the opener of the doubleheader. … The loss snapped Kentucky’s three-game winning streak over the Buckeyes.

Jim Walker jim.walker@irontontribune.com   SOUTH POINT — It was the shot heard ‘round the gym. Tanner Hall hit a shot... read more