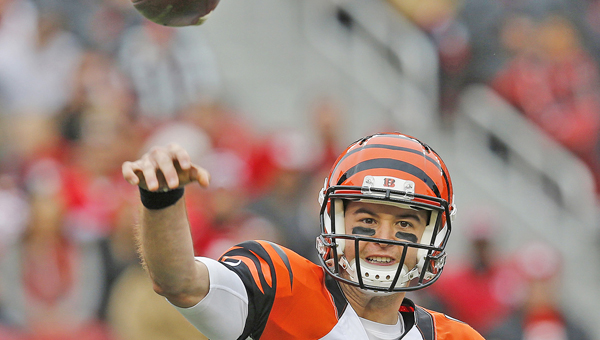 Cincinnati Bengals’ quarterback AJ McCarron (5) is trying to lead the team to a win this week against Denver in order to earn a first round bye in the playoffs. (MCT Direct Photo)

He’ll need to do a lot more on Monday night to get the Bengals where they ultimately want to go.

The second-year quarterback didn’t have a turnover during a 24-14 win in San Francisco last Sunday, his first start in place of the injured Andy Dalton. He’ll be facing the league’s top-ranked defense on Monday night in Denver with a first-round playoff bye riding on it.

He needs to do more than just avoid mistakes in order for the Bengals (10-3) to get that bye. He needs to manage the offense in a tough place for visiting teams to win.

McCarron is aware he’s still got a lot to learn while leading Cincinnati into the playoffs. The Bengals have clinched a playoff berth and would win the AFC North with a victory or a Steelers loss this weekend.

New England (12-2) is in line to get the top seed and home-field advantage throughout the playoffs. Whoever wins at Denver (11-3) on Monday night will be in position for the No. 2 seed, a first-round bye and at least one home playoff game.

It could come down to how well McCarron does against a defense that’s ranked No. 1 against the run and against the pass — a rare combination in the NFL.

When Dalton broke his right thumb during a 33-20 loss to the Steelers two weeks ago, McCarron took over and threw a pair of interceptions, one of which was returned for a touchdown that put Pittsburgh in control.

He was much better at San Francisco last Sunday, where he took sacks rather than risking an interception. Offensive coordinator Hue Jackson said the next step is to avoid the sacks and get rid of the ball rather than lose yards.

In addition to facing the league’s top-ranked defense, McCarron will be playing a cold-weather game. The two-time national champion at Alabama hasn’t had a lot of experience with the sub-freezing temperatures he’ll face on Monday.

“Going to prepare the same way,” the Alabama native said. “Instead of one long sleeve, I might just have two long sleeves. But I mean other than that, I think it’s pretty much the same way.

Notes: TE Tyler Eifert was still in the concussion protocol on Wednesday. He missed the game at San Francisco with a concussion. … The Bengals had a light practice, but weren’t required to give an injury report because of the timing with the game on Monday night. Their first report of the week will be on Thursday.