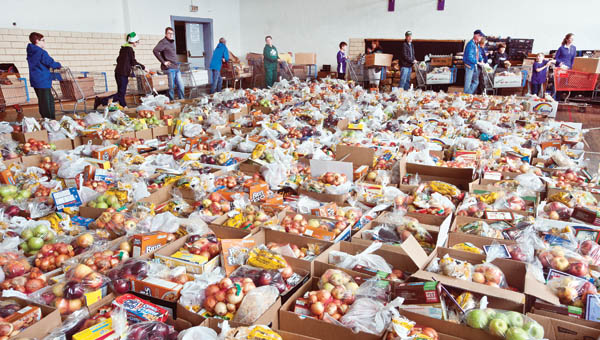 Volunteers gathered in the gymnasium of the Chesapeake Community Center, surrounded by more than 500 food baskets on Tuesday. The baskets were given out to area residents in need.

CHESAPEAKE — A steady stream of cars circled the Chesapeake Community center on Tuesday, as people picked up items at the Community Mission Outreach giveaway to the needy.

Inside the building’s gymnasium, volunteers from local churches, schools, groups such as Team Toni and others helped load gift bags into shopping carts, which were wheeled outside for drivers to pickup.

Don Moore, the chairman of trustees for CMO, who has organized the annual event for 30 years, said about 560 cars had come through so far.

“They can get a basket of fruit, a box of food a jug of milk, potatoes and a ham or a turkey,” he said.

Moore said the recipients had registered in advance with CMO and met income guidelines to qualify for the items.

The gift boxes contained items such as stuffing mix, onions, apples and a Christmas card with a crosspoint frame.

Many of the volunteers came from St. Ann Church in Chesapeake, such as Father Charles Moran.

“It’s been busy,” he said. “We’re just trying to keep it organized.”

Sarah Mayo, 22, a Proctorville native who now lives in Texas, was among those working in the gym.

“I’ve been doing it since I was in seventh grade, and volunteer when I come back,” she said.

Thomas Cantrell was one of the volunteers from Defender United Methodist Church. He said he has volunteered in past years.

“Our church has been a sponsor,” he said.

“There are at least four others from the school here,” he said.

Down the hall, volunteers ran a room full of Christmas gifts. Those who registered could come in and pick up toys, gloves, coats and other items.

“We’ve gone through lots of presents,” Karen Sullivan, a volunteer from St. Ann Church said. “We’ve had to restock a few times.”

Moore said there were about 50 volunteers in total working at the center for the giveaway.

“They come and go. We’ve got another group coming in this afternoon,” he said.