Browns run out of time in loss to Chiefs 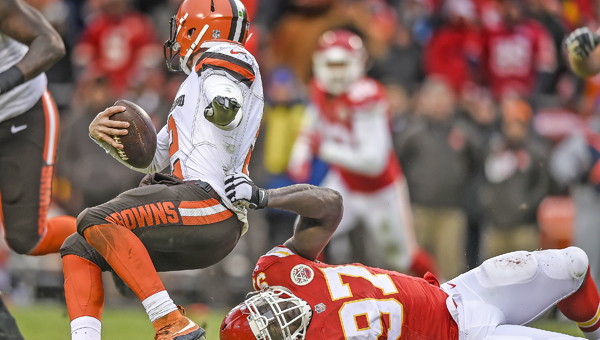 Kansas City Chiefs defensive end Allen Bailey (97) tries to hang on for the tackle of Cleveland Browns quarterback Johnny Manziel (2) during the third quarter on Sunday at Arrowhead Stadium in Kansas City, Mo. Manziel threw for 136 yards and ran for 108 but the Browns lost 17-13. (David Eulitt/Kansas City Star/TNS)

KANSAS CITY, Mo. (AP) — If the Cleveland Browns are still trying to decide whether Johnny Manziel is the future of their franchise, the competitive quarterback at least gave them some encouraging signs on Sunday.

Even if the result was all too familiar.

Manziel led a second-half comeback by making timely throws and scrambling for key first downs, only to run out of time in sight of the end zone in a 17-13 loss to the playoff-bound Kansas City Chiefs.

“He’ll be the first one to tell you the bottom line is finding a way to get the ‘W,”’ Browns coach Mike Pettine said, “but talk about on-the-job training. There’s no substitute for this. This will only be positive when you look back at the foundation.”

The Chiefs jumped out to a 17-3 halftime lead, but their offense became listless over the final two quarters, just as Manziel was pumping some life into the Browns (3-12) with his inspired play.

The former Heisman Trophy winner led Cleveland to 10 straight points, then had them in possession for a go-ahead touchdown before his incomplete pass to the end zone on fourth down with 2:55 left.

Kansas City had a chance to put the game away, but failed to pick up a first down, and Cleveland took over at its 30 with 1:52 left and no timeouts. The Browns picked up three first downs, and Manziel hit Darius Jennings on fourth-and-10 from the 32 with the final seconds ticking away.

They ran out before Manziel could get off another snap, and he spiked his helmet in frustration.

“I’m definitely shouldering a lot for this loss,” he said. “Regardless of what our record is, where we are in the season, it (stinks) not to win, especially when our coach and the other 10 guys put us in a position to try to get us in the end zone there at the end. I just felt like I didn’t do the right thing in crunch time. I think that’s the morale of the entire story of the game.”

Manziel threw for 136 yards with an interception, but he also ran for 108 yards to give his team a chance. Isaiah Crowell added 88 yards rushing and a touchdown for the Browns.

Meanwhile, the Chiefs (10-5) clinched a playoff spot when Pittsburgh lost to Baltimore moments after their game. They can still win the AFC West with a win in their finale against Oakland and a loss by Denver on Monday night or in the Broncos’ regular-season finale.

“To be 1-5, come back and win nine straight, to battle — we’ve been in some battles, some close wins,” Chiefs wide receiver Jeremy Maclin said. “Whoever thought the Browns were going to come here and lay down was out of their minds. We have to play better, especially offensively, but we got the win.”

The Chiefs looked as if they’d make this one easy in the first half, driving downfield for a TD on their opening drive. Smith zipped a pass to Maclin between three defenders for a score.

Travis Coons kicked the first of his two field goals for Cleveland, and an interception of Smith gave the Browns life. But two plays later, Manziel was picked by Marcus Peters, and the rookie returned his eighth of the season deep into Cleveland territory. Smith then connected with Travis Kelce with 32 seconds left to help the Chiefs take a 17-3 lead into the break.

Then the Chiefs got stagnant. And the Browns made things interesting.

His scrambling ability was critical to a nine-play, 82-yard drive to begin the second half, and Crowell finished it by racing 10 yards for a touchdown.

Then, after forcing a quick punt, Cleveland put together a grinding 21-play drive that took up more than 12 minutes despite going only 62 yards. Three times, Manziel picked up a first down by scrambling on third or fourth down, though his intentional grounding penalty helped force a field goal.

The Browns had twice more advanced deep into Kansas City territory. The final time came in the game’s final seconds, when he couldn’t get the ball spiked in time.

“Johnny is one of those quarterbacks you can never get comfortable with him, Chiefs linebacker Derrick Johnson said. “For a defensive guy he’s a headache. But at the end of the day, time ran out on him.”

NOTES: Maclin became the fourth wide receiver under Andy Reid to eclipse 1,000 yards receiving. He has 1,034. … Browns RB Raheem Mostert (ankle) and WR Marlon Moore (concussion) left in the second quarter and did not return. … Smith threw for 125 yards, giving him a career-best 3,330 this season. … The Chiefs only had 258 yards total offense.

COLUMBUS (AP) — Keita Bates-Diop had the best first half of his short Ohio State career when the Buckeyes needed... read more