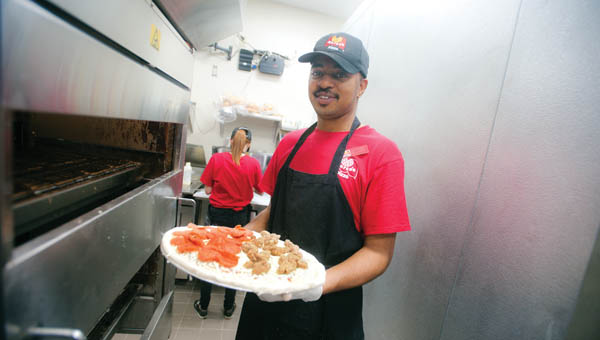 Kenerick “Smiley” Jones prepares to insert a pizza into the oven at the new Marco’s restaurant in downtown Ironton.

With just a week since opening in downtown Ironton, Marco’s Pizza is reporting record sales.

“On the first day the drive-through was lined up down the alley,” Mike Chapman, co-owner of the restaurant, said. “That is unheard of.”

Of the three stores Chapman with his wife, Bettie, own, the Ironton restaurant has had the best opening.

“Ironton is embracing us and I hope they continue to embrace us and we will give them a good product,” he said. “We are staying consistently busy.”

The Chapmans remodeled one half of the former AEP building on South Third Street to turn it into a Marco’s, one of the fastest growing pizza restaurant chains.

“Stone work along the walls and Travertine Tile flooring in earth tones has transformed the building.

“We gutted it and started from scratch,” Chapman said of the building owned by the Lawrence Economic Development Corporation.

The store has 30 employees.

The Ironton store is the first for the Chapmans in Ohio, who have two stores in Huntington and a franchise store in Hurricane, West Virginia.

The Chapmans plan to open six more stores in the area over the next three years.