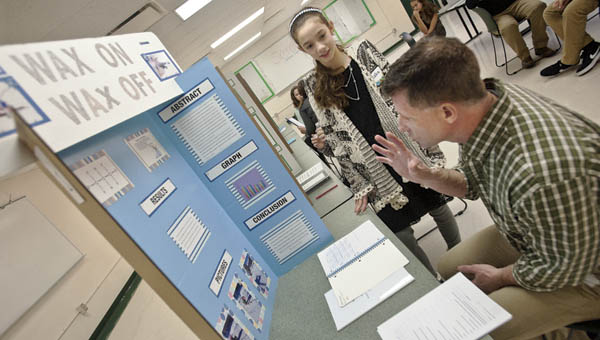 Judge Dan Webb speaks with student Blake Anderson on his project of “Wax On Wax Off” at the Fairland Middle School science fair Wednesday.

Six projects from seven students were on display at the school’s science fair. While participation may have been smaller than some events, the ones who took part were completely dedicated to their work.

Amanda Long, a science teacher at the school and the fair’s coordinator, said participation in the fair was not mandatory and students undertook the projects out of their own interest.

“All the kids did it strictly voluntary and purely out of their love of science,” she said.

Among the projects, Jesse Lewis and Jacob Polcyn, both of the seventh grade, of Proctorville, sought to learn how light affects the growth of stalactites.

They grew the formations from a mixture of Epsom salt and water and tried a light environment and a dark one.

“We thought they would grow more in the dark, because of how it is in caves,” Lewis said.

However, they found that the light environment grew them faster, contrary to their hypothesis.

Brooke Anderson, a seventh grader from Chesapeake, tested how the amount of protein in food can suppress hunger.

She hypothesized that the more protein in a food, the longer it would hold off an appetite.

For her experiment, she had people consume a protein drink, a Pop-Tart, a Nutri-Grain bar and eggs at the same time in the morning.

The drink had the highest amount of protein, so she figured that it would keep away hunger the longest.

However, she found that the eggs were most successful. She reasoned that this was different from her hypothesis in that the liquid drink was digested faster.

“It went straight through them,” she said.

She took five plants and gave them the same amount of sunlight and water. Each plant was played a different type of music for two hours, from classical, hip-hop, jazz, country and gospel. The fifth plant, which acted as a control, received no music.

She hypothesized that the plant that was played hip-hop would grow the most, due to the heavier vibrations in the sound.

However, the plant that received no music grew the most.

The other projects included Blake Anderson, a sixth grader from Chesapeake, who tested how different types of wax would affect the speed of skis, Density Intensity, by Zoie Weinsweig, who experimented on the ability of different substances to hold oil and Sydney Belville, a Chesapeake sixth grader, who tested the effects of different temperature environments on the growth of mold.

Long said the projects were judged by individuals from the community, including high school science teacher Dan Webb. She said many times, students studying science at Marshall University serve as judges.

Projects that attain a qualifying school will go to the county fair, set for Feb. 4 at Chesapeake Middle School. From there, they can compete in district and regional events later in the year.

Plea is made in pill case

Sentencing not yet set A co-defendant in a case involving the former Pinnacle Wellness and Longevity Clinic in Ironton appeared... read more