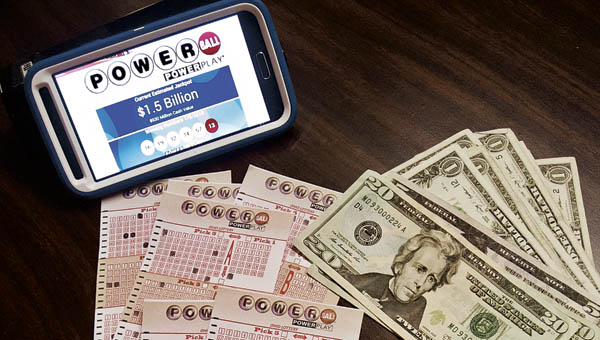 The Powerball jackpot is at a world-record $1.5 billion for Wednesday night’s drawing.

The digital sign on U.S. 52 that usually displays the Powerball jackpot numbers has gone dim, but that doesn’t mean tonight’s drawing couldn’t bring more than a little brightness to someone’s New Year.

With an estimated $1.5 billion (and climbing) up for grabs, lottery ticket retailers are seeing an upswing in customers gambling for a chance at a world-record-breaking win.

The odds of matching all six numbers to win the jackpot are one in 292.2 million.

Lottery officials expected at least 80 percent of the 292.2 million number combinations would be purchased before tonight’s drawing. That increases the chances — but doesn’t guarantee — that someone will win the jackpot.

But, as Pedro resident Robin Linkfield said, you can’t win if you don’t play.

“I can dream about it, but if I don’t buy a ticket, there is no chance for the dream to come true,” she said.

Linkfield made a stop at the Speedway in Coal Grove on Monday to turn in some scratch-off tickets from the holidays and said she would buy a Powerball ticket before the big drawing.

“It’s overwhelming to think about,” she said. “You’re going to have a career as a new money manager.”

As overwhelming as thinking about winning the jackpot can be, retailers have been overwhelmed with the volume of people buying tickets.

April Woods, who works at the Speedway on Marion Pike, said people were lined from the registers all the way to the back of the store waiting to buy tickets on Saturday. That drawing was for more than $800 million and she said about 4,000 tickets were sold at her store that day.

On Monday, a steady stream of customers came through the store, many of them buying tickets as well.

“It was pretty busy,” he said. “It started out slow then it got crazy as the day went on.”

No one has won the Powerball jackpot since early November, which is why the prize has grown so large. The bigger prize seems to have enticed more people to buy tickets, and that drives up the jackpot. The increased ticket sales also make it more likely there will be a winner, simply because all those extra tickets mean more number combinations are covered.

“Just about everybody who comes in, they will end up buying a Powerball ticket,” Southworth said.

“I’ve never seen it that high,” he said of the jackpot. “I wish they wouldn’t make it so hard to win.”

Hard to win is a bit of an understatement.

Hitting the jackpot requires matching the number of five white balls, numberd 1 to 69, plus the red Powerball, numbered 1 to 26.

The odds of hitting the jackpot are about the same as your odds of flipping a quarter and getting heads 28 times in a row.

What about those people, like Sharp, who buy multiple tickets?

Scott A. Norris, an assistant professor of mathematics at Southern Methodist University, said you have 10 times the odds if you buy 10 tickets, yet the probability is still incredibly small.

“The odds are so astronomically small that even 100 times that number is exceedingly unlikely to win,” Norris said. “It’s probably still not going to happen if you buy a hundred tickets or a thousand tickets or even a million tickets.”

Norris also said there are slightly better odds for those who let the computers decide their numbers. That’s because when people use birthdates or other favorite figures, they generally choose numbers 31 or below. That ignores the fact that there are 69 numbered balls.

If you have extra cash and are thinking of buying all possible number combinations, that is allowed, but it wouldn’t be very smart. At $2 a ticket, the strategy would cost about $584 million, and when taxes are subtracted, you’d end up losing money.

And if someone else had the winning numbers, you’d need to split the prize. You’d make back some of that money by smaller prizes paid for matching three, four or five of the balls plus the Powerball, but chances are, it still wouldn’t be a good bet.

Despite the odds, someone will eventually win the prize.

John Preston, of Russell, Kentucky, said it was hard to imagine winning that much money.

“I have no idea what I would do,” he said. “Everybody thinks about it, but it’s hard to imagine. Your life would change completely.”

The $1.5 billion prize would be paid in annual payments over 29 years. Or the winner could opt for a lump-sum payment of $930 million.

Whoever wins will have to pay 39.6 percent of the prize in federal income taxes, and any state taxes.

So is it better to take the money as an annuity or in cash?

Olivia S. Mitchell, a professor of insurance and risk management at the Wharton School at the University of Pennsylvania, said to avoid the risk of overspending or an investment mishap, a safe option would be to take the annuity, guaranteeing a huge annual payout for three decades.

“We know the average American is quite financially illiterate,” Mitchell said.

For those who want to invest the money themselves, Mitchell suggested setting aside part of the cash option to buy their own annuity that would give them a guaranteed income in case the return on the money they do invest comes up short.

“That way, you still might not beat what the state pays,” she said. “But on the other hand, you’ve protected your basic consumption needs.”

Jackpot numbers are reported as of presstime Wednesday