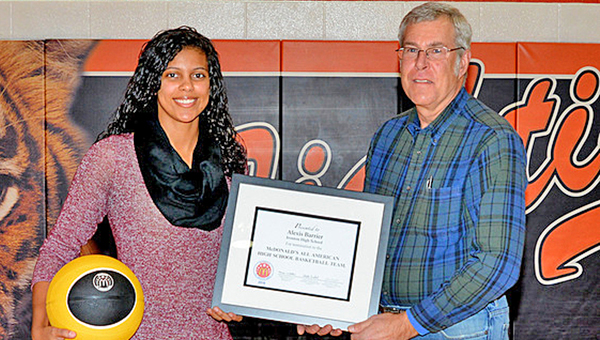 Almost every year you hear an actor say winning an Academy Award would be great but the real honor is just being nominated.

Steve Cielec — local franchise owner of three different McDonalds — presented Barrier with a plaque commemorating her selection as one of the 750 finalists.

“It’s truly an honor for our area to have her nominated. Throughout the country 750 girls are nominated and they’re selected through a committee of experts,” said Cielec.

“Tens of thousands applications are sent in, so for our area to have one of those players nominated is a true honor.”

The final team will be announced Jan. 17.

The magnitude of the award for making the final nomination list wasn’t lost on Barrier, but she tried to keep it all in perspective.

“I do realize what it means. I’ve had people above me nominated, but it still means a lot tome that I was able to do it myself and get there,” sad Barrier.

“If I get picked, it would be an honor and a great opportunity and I would love it. But I can’t keep my mind focused on it because you don’t want to get let down. So I just focus on the season and worry about basketball and how we’re going to make it to Ohio State (the state tournament site). That’s what I’m worried about.”

“A lot of times you have somebody who is really good at whatever they do and they let other things come in and influence how they act. I don’t get that vibe from her. My four years with her have been wonderful. She’s a team-first type of kid,” said Ironton coach Doug Graham.

Whether Barrier is named to the team or not, Graham said she will have a last impact on the girls’ program.

“For her, it’ just a lot of gym hours. For Ironton girls’ basketball, she’s kind of becoming the standard other girls will measure themselves to. That fourth grader or that second grader or that seventh grader, whoever it may be, they’ll look at Lexie Barrier and say, she did this or she did that and I want to beat that.”