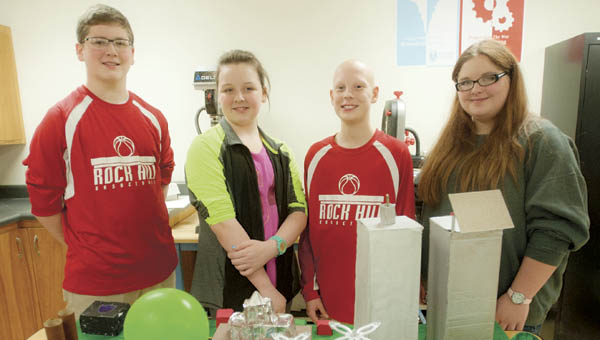 Tucker Meadows, Katie Tennison, Nathan Wroblewski and Olivia Edwards pose with their concept model for the city of the future as part of Project Lead the Way.

Students at Rock Hill Middle School are putting their skills to use and designing a city for the future.

Four seventh graders in the biomedical class of Project Lead the Way, working under adviser Matt Monteville from Collins Career and Technical Center, have built a concept model of a city that they will take to Columbus for the DiscoverE Future City competition on Saturday.

For the concept of “Waste Not, Want Not,” Olivia Edwards, Tucker Meadows, Nathan Wroblewski and Katie Tennison were challenged to design waste management systems for commercial use and to consider factors such as waste reduction, reuse, collection, separation, processing, recycling, related health and safety issues, energy efficiency, environmental impacts and cost in their design.

The students, all volunteers from the larger class, have been working on the project since mid-November, first designing the city on the computer, before constructing the model, which was composed of found objects from around the classroom.

“Making it with recycled materials was part of the project,” Edwards said.

The city boasts solar and wind towers for power, and a hydro pump for water and sewage. They had to take in the topography and natural resources they were given and make use of them in their proposal.

The tallest buildings in the city are the two mega towers, which were designed for office, mall and residential space and feature an observation deck and solar panels on top.

Recycling is a major part in their city, which strives to be environmentally efficient.

“One hundred percent of our citizens recycling is one of our major goals,” Edwards said.

Regular collection of materials for recycling would be a big push under their plan.

Garbage in the city would be sent to an atomizer, where it would be broken down.

Another feature is the Academy, where ideas for improvements would originate.

“Scientists would work on many projects for the future,” Tennison said.

In addition to creating the model, the students had to write a 1,500-word essay summarizing their ideas and will give a seven-minute presentation at the competition.

The state winner of the event at Columbus State Community College will go on to compete in the national competition in Washington, D.C. in February.

Monteville said the class allows students to learn about engineering in the seventh grade. Once they reach the high school level, he said they have the option of taking engineering or biomedical classes for college credit.

He said the Rock Hill class is the first group to participate in the competition, and he hopes for a countywide effort next year, with students from the other schools he mentors getting involved.