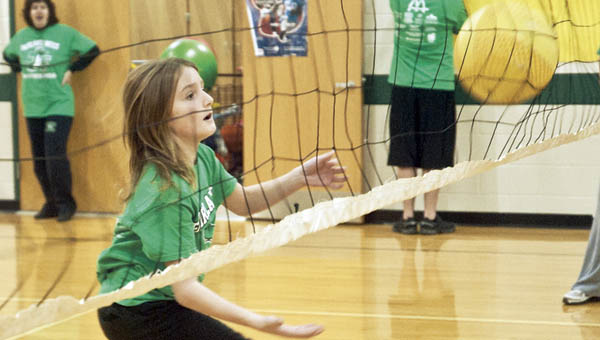 Noah Marcum returns a serve during a game of volleyball as part of a special athletic event at Fairland West.

ROME TOWNSHIP — The weather may be too cold to exercise outdoors, but students at Fairland West Elementary were able to stay active on Friday.

The school hosted Fun Fitness Friday, one of four events throughout the year aimed to keep children fit.

For this week’s event, in conjunction with the end of the nine weeks grading period, students in all of the school’s third through fifth grades took part in a volleyball tournament, with classes competing against each other in a bracket system.

Two games took place simultaneously in the school’s gymnasium and cafeteria. The enthusiasm of the students was evident as they chanted and cheered loudly.

Vice principal Sandy Joseph said the event was sponsored by the school’s Parent Teacher Organization and local businesses, who chipped in to buy 500 shirts for the tournament. The competition was organized by Nathan Speed, who teaches physical education at Fairland East and West, and serves as a coach at the high school.

He said the events, which can take the form of tug of war or kickball, in addition to the volleyball tournament, keep the students active.

“It shows that there’s more than one way to stay fit,” he said. “And they can’t get outdoors to burn off energy at this time of year.”