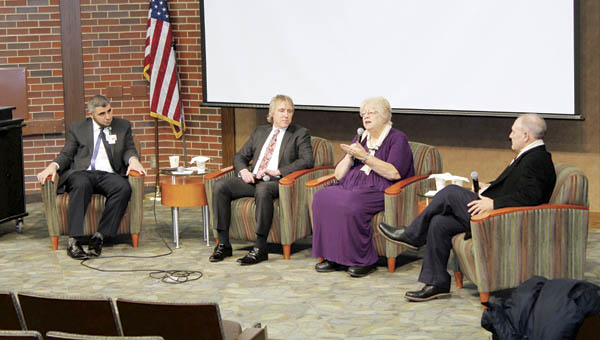 Members of different faiths and dominations came together Tuesday at Ohio University Southern to discuss their differences, find common ground and educate the public about their beliefs.

The annual Interfaith Dialogue was in Bowman Auditorium as part of the school’s week-long observation of the federal holiday in honor of Dr. Martin Luther King Jr.

Dr. Charles Jarrett, the chairperson of the university’s Council on Diversity and Inclusion served as moderator and hosted Dr. Deron Newman, a minister in the United Methodist Church and instructor at OUS and Morehead State University; Dr. Ahmad R. Nusair, an associate professor of medicine at Marshall University; and the Rev. Jan Williams, a retired Presbyterian pastor from Ironton.

Williams said she came of age in the 1960s and remembered the assassinations of King, President John F. Kennedy and U.S. Robert F. Kennedy.

“That’s when my political conscience formed,” she said.

She said, however, her faith is not political, but motivated more by a desire to seek social justice.

Nusair, a Muslim from Jordan, serves as secretary of the Islamic Association of Huntington.

He said the Middle East is known for its conservative approach to spirituality.

But he spoke of a new wave of thinking, which he said his parents were a part of, which takes a more secular approach to life.

He said his faith is motivated by seeking to be a better person and wanting to improve what is happening in the world and spoke of the work he and his wife have done for charities, raising money to help orphans both in the U.S. and abroad.

Newman spoke about how his faith coincides with his work as an educator.

“I see my work in teaching to be my calling, and feel I’m divinely inspired to be in education,” he said. “But my faith doesn’t limit me in my ability to understand those without faith.”

All three members of the panel said they had become more liberal in their faith as they grew older, and have been able to find a larger understanding of others.

Jarrett referred to King’s philosophy of creating a “beloved community,” in dealing with social issues.

“I was reading about it this morning, and one thing that struck me is that inclusion is there,” he said.

A student asked the panel about the issue of faith in public institutions, specifically the issue of school prayer and asked what could be done to “get God back into schools.”

Newman said individuals could still pray individually and that nothing could stop them from doing so, but took issue with the idea of school-ordered prayer.

“I think we need a place for religious thought,” he said. “But I don’t want it organized or imposed on me.”

Nusair told of how, when he lived in the midwestern U.S., schools had no religious activities, but found that West Virginia had Christmas events and Christian-themed events.

He said, as a parent with two Muslim children in the public school, he found himself having to explain why he didn’t want them to participate.

“It’s not that I hate Christmas,” he said. “But it is confusing to have our children participate.”

However, he suggested to the student that if she felt the schools were limiting her children, that she should have a dialogue with officials.

“If you approach schools the right way, they will make provisions for you,” he said.

Williams said she supported the separation of church and state as well.

“If someone imposed faith on me, I wouldn’t appreciate that,” she said. “Even though I’m a Christian, it’s not up to me to impose on others.”

As an example, she asked how Christian parents would feel if an imam or a rabbi came to school to lead a prayer event.

Another student asked the panel how they felt about the more negative elements of religion and how it reflects on the faith, citing examples such as the anti-gay protests of the Westboro Baptist Church at soldiers’ funerals, the pedophilia scandal in the Catholic Church and Islamic terrorism.

Williams said when she hears of hateful expression of faith, it “breaks my heart.”

“It keeps people from connecting with divinity and denies them the opportunity to know they are loved,” she said. “I hope people can see through it, so that we can connect people to God.”

Nusair said he challenges members of his faith to be more true to the principles of their religion, rather than just be devout.

“I challenge people about the fundamentals of Islam,” he said. “You’d be amazed how few know what our religion is about.”

Newman agreed that individuals should focus on the teaching of their religion in such a way.