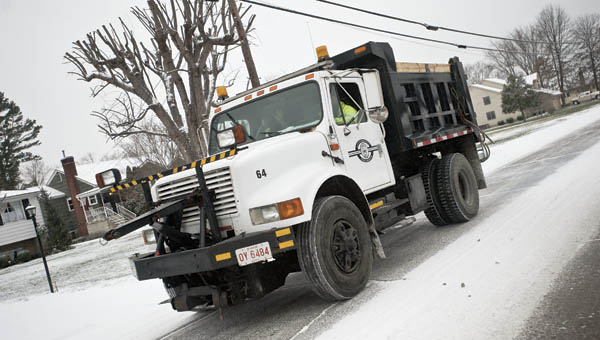 Warning in effect until Saturday evening

Ironton residents spent Thursday cleaning up from Wednesday’s snow, while preparing for the much heavier accumulation set to hit region early Friday, as Winter Storm Jonas moved in on the Ohio Valley and the mid-Atlantic region.

The National Weather Service has issued a winter storm warning for Lawrence County and much of the surrounding area until 7 p.m. Saturday.

“I’d say about a foot, plus or minus a few inches,” he said.

Beavers said areas to the north and west of Lawrence County won’t see as much snowfall, while heavy amounts will fall to the east and south. He said the snowfall will taper off sometime Saturday afternoon.

Throughout Ironton, people were shoveling and salting sidewalks while local stores saw a surge in shoppers stocking up for supplies in anticipation for blocked roads and possible power outages.

“Salt, sleds and shovels,” he said.

He said sleds are a popular item when the snow comes.

“As soon the schools get called off, we get hammered for those,” he said.

At Pick ‘n Save at Ironton Hills, assistant store manager Brian Rideout said crowds had been pouring in, doubling the store’s budget on Wednesday alone.

He said customers had been stocking up on basic supplies like milk, bread and eggs, while snack items, soda and hamburger meat were also in high demand.

In addition to food items, he said shoppers were also seeking fire logs and salt to deal with the winter conditions.

He said while the store sees a spike in sales before a storm, there is usually a drop afterwards, as customers have a stockpile of groceries on hand for the next week.

“It helps us at the beginning, but then it goes away,” he said.

Meanwhile, over at the Ohio Department of Transportation garage on Commerce Drive, County Administrator Harry Fry said they were prepared for the oncoming winter storm.

Fry said, starting at midnight, they would be going to 12-hour shifts, with crew working from midnight to noon and from noon to midnight.

“When they get started, and we call them in at midnight, we’ll check for minor issues with trucks, get them loaded get calcium in the tanks,” he said. “They’ll be getting prepared to go out.”

He said a fleet of 12 trucks would treat U.S. and state routes in the region, while the county garage would handle county roads.

“We’re continuing to watch the forecast, and when the call comes, they’re ready to go out,” he said.

Commissioners waiting until next meeting for possible consideration Getting a 2016 budget for Lawrence County will take at least another... read more