Manning, Denver get 20-18 win over Patriots 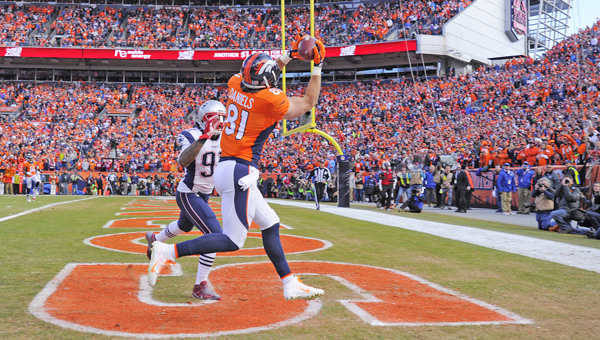 Denver Broncos’ wide receiver Owen Daniels (81) gathers in the second of two first-half touchdown catches during the first quarter of the AFC Championship game on Sunday in Denver. The Broncos beat the New England Patriots 20-18 to win the AFC title. (MCT Direct Photos)

DENVER (AP) — When Peyton Manning was watching games from the locker room a few months ago, none of this seemed possible.

Manning back on the field, playing the role of the most decorated game manager in history.

Manning churning his 39-year-old legs around right end for a 12-yard gain and a first down.

Manning back in the Super Bowl.

The strangest season of No. 18’s Hall of Fame-ready career will play itself out all the way to the last game. Manning and the Denver Broncos are heading to the Super Bowl, thanks to his efficient offense and a big-play defense that saved a 20-18 victory over Tom Brady and the New England Patriots on Sunday.

“It’s been a unique season,” Manning said. “And this game today was a unique football game.”

Manning’s third-quarter scramble for a first down — “The run,” he called it, using air quotes — might be the most celebrated scramble by a Broncos quarterback since John Elway helicoptered in the Super Bowl, 18 years ago. It was certainly the most unexpected.

“He’s going to do what he has to do to win,” Broncos coach Gary Kubiak said. “He’s one of the greatest competitors ever in this league.”

That play helped flip the field early in the second half for the Broncos (14-4). Then, defense saved the day.

Manning’s fourth trip to the Super Bowl wasn’t wrapped up until cornerback Bradley Roby picked off Brady’s pass on a 2-point attempt that would have tied it with 12 seconds left.

Brady hit a double-covered Rob Gronkowski in the back of the end zone on fourth down from the 4 to set up the potential tie. The Patriots had to go for 2 because Stephen Gostkowski pushed an extra point to the right in the first quarter — his first miss in 524 tries.

“All day, these guys put their bodies and lives on the line, and for me to come out here and miss a kick, it’s a nightmare scenario,” Gostkowski said.

That left it to one play, and after the Broncos took a timeout to give DeMarcus Ware time to rest and get back in the game, Aqib Talib stepped in front of Brady’s pass and deflected it skyward.

Roby, who forced the game-changing fumble in last week’s victory over Pittsburgh, made the pick. The Broncos recovered the onside kick and the celebration began.

Manning improved to 6-11 in his vaunted series against Brady, but 3-1 with the AFC title on the line. Manning surpasses Elway as the oldest quarterback to take his team to the Super Bowl. The Broncos will play Carolina, a 49-15 winner over Arizona in the NFC game.

New England (13-5) came up short and won’t get a chance to go back-to-back and win a fifth Lombardi Trophy.

The Patriots lost their last two regular season games to squander home-field advantage. In a game that came down to one play, that may have made a difference. Another possible factor: Bill Belichick’s decision to pass up short field-goal attempts twice in the fourth quarter while trailing by eight.

“Because of the scoring situation in the game,” Belichick said.

They’ll have the winter to debate it in New England.

In Denver, the season goes on.

Whether it’s been Manning lining up under center, or Brock Osweiler, who took snaps while Manning was injured for six weeks, the Broncos have depended on a defense that gave up the fewest yards in the NFL.

Von Miller finished with 2 1/2 sacks and an interception. The Broncos harassed Brady into a 27-for-56 day for 310 yards and two picks.

After giving it up twice on downs inside the Denver 20 late in the fourth quarter, Brady lobbed a 40-yard pass to a double-covered Gronkowski on fourth-and-10 to keep the late TD drive going.

But the Broncos barely held on, and the franchise is now headed to its eighth Super Bowl. The last trip was ugly — a 43-8 loss to Seattle two years ago.

His 17-for-32 performance Sunday was not Vintage Manning. But 17 completions were enough, and the two most important were touchdowns to Owen Daniels, the tight end who has played his whole career with Kubiak.

“He understands where he is and what we’re trying to do offensively,” Elway said of his veteran QB, who has a chance to walk off a champion, the way No. 7 did. “He has always been a great game manager, but even more so now.”

Manning was far from perfect. A dump-off screen to Ronnie Hillman went backward, and New England’s Jonathan Freeny recovered. Two plays later, the Patriots were on the board — but with six points, not seven, because of Gostkowski’s miss.

A strange twist? Yes, but the Broncos are used to those by now.

Manning’s scramble was a 180-degree difference from last January, when he pulled up and threw in the playoff loss against the Colts despite a huge swath of open space in front of him. Some thought his career might be over after that game.

Nope. Not after this one, either. There’s at least one more game in his future — Feb. 7 in Santa Clara, California.

“I’ve really tried to take it one week at a time all season long, through the injuries and all the things that have gone on,” Manning said. “I’ve stayed in the moment. Stayed patient. That’s served me well.”

CHARLOTTE, N.C. (AP) — Superman is bringing his cape and his pen to Super Bowl 50. He’s leaving behind his... read more