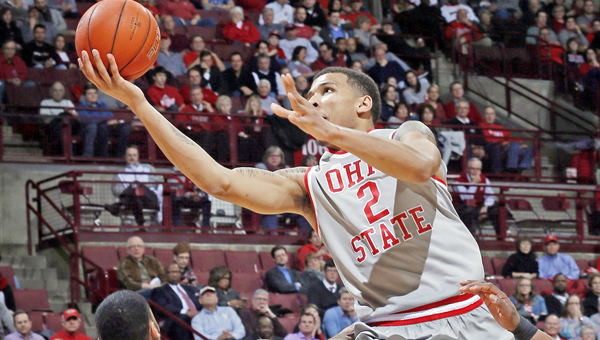 The first came two days before the game, when he sat down Keita Bates-Diop to talk about a scoreless performance against Purdue his last time out.

“I told him ‘I need you to be more aggressive,”’ Matta said.

The sophomore forward took the message to heart and responded with a game-high 22 points against the Nittany Lions.

“When he said that, I didn’t want to let him down, come out and do the same thing again,” Bates-Diop said. “The talk definitely helped.”

He found his shooting stroke early, scoring 13 points in the first half.

Bates-Diop finished the night 8 of 14 from the field, including 4 of 7 from long range.

“Twenty-two points or whatever is a bonus,” Matta said. “I just wanted to see Keita back to playing the way he can play and I thought he was effective tonight.”

While they combined for only nine points, both found other ways to impact the game. Giddens hauled down a game-high nine rebounds while Harris handed out four assists.

Tate called Harris, a 5-foot-9 freshman from Dayton, “the head of the snake.”

“He gets us going,” Tate said. “He has the ball in his hands and we feed off of him.”

“I thought they loaded up inside, made it very tough for us to post up,” Penn State coach Pat Chambers said. “We kicked out and we didn’t make ‘em. They had five guys in the paint and did a really good job of taking away what we’re good at. Give Thad credit.”

Ohio State outscored Penn State 22-8 over a 12-minute span in the middle of the first half to extend a 7-6 lead to 29-14, but the Nittany Lions recovered.

PSU enjoyed a 12-4 advantage in the last five minutes of the first half to go to the locker room trailing by only seven.

Ohio State scored six of the first eight points in the second half to extend the lead back to double digits, and Penn State never got closer than nine the rest of the way.

Penn State: The Nittany Lions lost their second in a row and for the fourth time in their last five games.

Ohio State: The Buckeyes’ 33-26 halftime lead could have been larger if not for 10 turnovers that Penn State converted into 10 points.

Ohio State had 35 defensive rebounds and improved to 60-1 under Matta when grabbing at least 30 in a game.