Lecturer to give insights in early civil rights movement 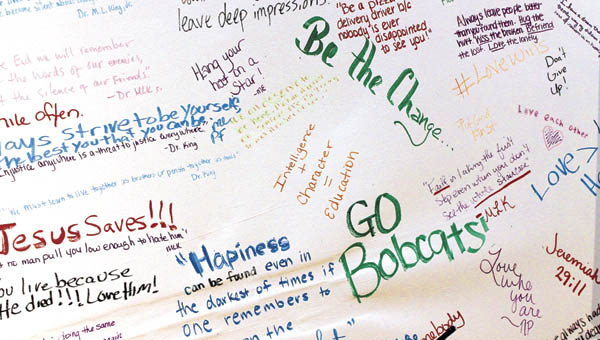 Entries on a Remembrance Board set up at Ohio University Southern honor the legacy of Dr. Martin Luther King Jr.

The isolation of rural Georgia galvanized Joan C. Browning into her life’s work of aiding the disenfranchised. Just as importantly, it introduced her to Dr. Martin Luther King Jr. and those recollections will be the basis of her lecture on Thursday at Ohio University Southern as part of the celebration of the leader’s legacy.

Browning was 17 and had been going to a Methodist Church. No problem, except Browning is white and the church she had chosen was African American.

“I was kicked out of college,” Browning said. “I was country. I didn’t know there was anything wrong. That was not to be done. First I was mystified. I was 17 years old. Then I was angry. What do you mean I can’t go to this church.”

Pushed out of college forced Browning to go to Atlanta to find work.

“I had to make a life for myself,” she said.

Part of that new life was hearing about a free lecture on an African American college campus in Atlanta. The lecturer was King. The time was October 1961.

“He wasn’t preaching,” Browning said in a phone interview from her home in West Virginia. “He was just wonderfully teaching non-violence and civil disobedience.”

Those at the lecture called the civil rights leader a prophet.

“If I am in the presence of prophet, I will get an autograph,” Browning said. “I don’t know where I got the nerve, but I got my autograph.”

Although King’s reputation was just beginning to grow, the man had a charismatic quality even then.

“He was very dignified,” she said. “He held himself with great poise. People don’t realize how short he was. But he carried himself in a way that was more important than his stature.”

From that lecture Browning joined the Freedom Riders, who focused on changing the laws that restricted blacks on public transportation.

In seven months restrictions were lifted, she said.

“A lot of movements were born out of the Freedom Riders,” Browning said. “Like disability rights. When I see cutouts in sidewalks, I think we helped to do that. But we didn’t’ solve all of the problems. There is an abundance of problems. Racism is still a big factor.”

Later Browning was one of the founders of the Federation of Southern Cooperatives.

“I learned to sell handcrafts made by poor people to rich people who had money,” she said.

The West Virginia Institute of Technology heard of her work and invited up to go north, where she has lived since 1979.

The lecture begins at 6 p.m. at the OUS Bowman Auditorium.

Will be in court Monday SOUTH POINT — A South Point man is facing rape charges following his arrest on... read more