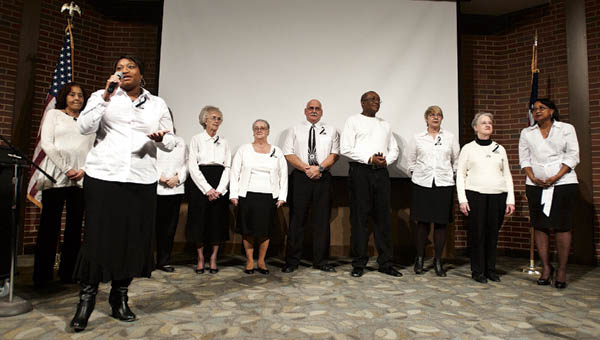 One of the nine white women who were among the Freedom Riders civil rights protests of the 1960s came to Ironton to share the lessons of love she learned from Dr. Martin Luther King Jr.

Jailed for 10 days in Albany, Georgia, for protesting segregation on public transit, Joan C. Browning, now a writer and lecturer, met King when at 18 years old, she heard the civil rights leader give a lecture in Atlanta.

“Dr King said violence may create a temporary victory, but it creates more social problems,” Browning told the audience at the 24th annual Dr. Martin Luther King Jr. Community Celebration at Ohio University Southern on Thursday. “An eye for eye leaves everyone blind. The means of a goal has to be as pure as the goal itself. Non-violence is the consistent refusal to cause people harm.”

Browning grew up in the Deep South where signs saying “No Coloreds Here” or “Whites Only” were prevalent.

“Everywhere there were the signs on what color person could go into a restroom,” she said. “But they forgot to put these signs on churches.”

By invitation she began attending an African-American Methodist Church. When the all-white girls college she was attending found out, she was dismissed from the school.

That began her involvement in the volatile civil rights movement

She learned from King “we have an obligation not to cooperate with evil,” she said. “All men have the potential for good.”

Commissioners create budget for more money then is available A record $17 million budget has been passed unanimously by the... read more