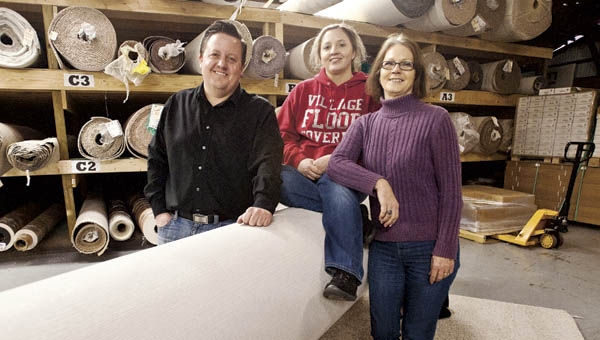 The Fowlers will celebrate 40 years of business this year at Village Floor Covering in South Point.

A family-owned South Point business is adjusting to their new location in preparation for their 40th anniversary in November.

Village Floor Covering, which sells carpet, vinyl, laminate, hardwood and ceramic flooring, was launched by Brenda and Darrell Fowler in Proctorville in 1976.

Brenda Fowler said the business then moved to Scottown for several years, before coming to South Point. The business was originally located at a Fourth Street showroom, but, last year moved into the current location at 305 Third Street West.

“We used this location as our warehouse, and our showroom was up the street,” she said. “We decided to remodel this and put everything in one location last year.”

Fowler said that the idea to get into flooring sales came from her husband.

“He worked as an installer, and the opportunity was there for him to start his own business,” she said.

Their son, Bryan Fowler, was born shortly after they launched the business, for which he now works part-time. His younger sister, Tiffany Bland, also works at the store full-time.

While they sell materials wholesale, Brenda said the business also uses three to four crews to install the flooring in homes in Ohio, West Virginia and Kentucky.

She said they go to several conventions and shows a year to search for products.

“We did one in Las Vegas last week,” she said. “We try to bring all the newest things in flooring back to Lawrence County.”

While some styles have dwindled in popularity, such as sculptured carpet, and others, like shag, have made a comeback, Brenda said the biggest thing that has changed the most about the industry since 1976 is the amount of choices customers have.

“When we first started, carpet and vinyl were about the only options,” she said. “Now there’s carpet, hardwood, laminate, LVT tile, ceramic and porcelain.”

She said hardwood flooring and carpet are the most popular items with customers, particularly frieze carpet.

She said the business has done well in the four decades since opening.

“We’ve had more better years than not,” she said. “It has been good to us.”

The family hopes to have a celebration later this year to mark the business’ anniversary, including an open house and a baked goods sale.