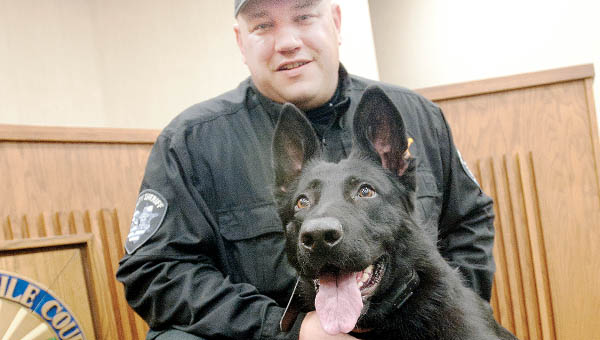 The partner who has Lawrence County Sheriff’s Deputy Steve Sisler’s back may weigh only about 100 pounds. But Johnny’s no weakling.

He’s a 2-year-old Holland-born German shepherd who knows how to chase the bad guys and take care of his deputy partner with a devotion that shows in his face.

Johnny is the latest addition to the sheriff’s office’s K-9 unit, joining Hemi, deputy Scott Wilson’s partner, which is the department’s drug-sniffing dog used in the schools.

The dog cost $15,500 with training for Sisler and the dog another $6,000. Grants paid that cost, including a significant one from Lawrence County Juvenile/Probate Court.

Sisler and Johnny spent two months at the Southern Ohio Police Canine in Ripley drilling on the commands that will send the shepherd into a school for a drug search, search for a missing child or pursue a criminal including biting the perpetrator.

“He will bite until I call him off,” Sisler said.

In fact, just a few days on the job the prospect of that event kept a burglar the two had cornered in the eastern end of the county from running.

The dog understands 10 commands either in English or Czechoslovakian.

Johnny lives 24/7 with Sisler and has bonded with the deputy’s 2-year-old son, Carson.

“Having this dog will help protect the officers and the public by being able to apprehend, search houses and buildings,” Lawrence County Sheriff Jeff Lawless said. “He will keep us from putting lives in jeopardy and help rid our streets of this drug epidemic that we have. We are glad to have him.”

CINCINNATI (AP) — With the Iowa caucuses today opening the voting in the Republican presidential race, some activists in a... read more