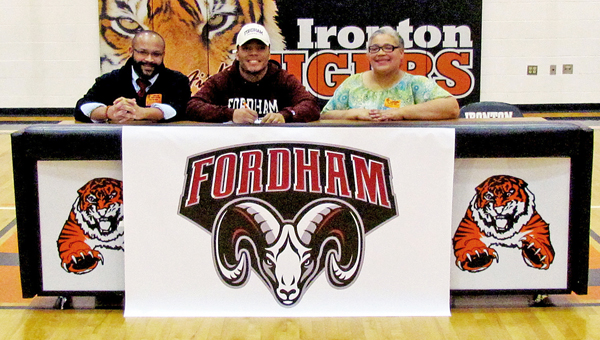 For D’Angelo Palladino, it was first come, first serve.

The Ironton Fighting Tigers’ senior running back was talking with coaches during a recruiting conversation and got quite an offer.

“My junior year, Fordham contacted coach (Mark) Vass and I had no clue who they were. They told me that I would be an asset to their team and I took the opportunity to listen,” said Palladino.

“They told me they were recruiting three running backs and the first running back to commit they would cut the other two off. So I decided to verbally commit and I wanted to go there anyway just because it was in New York and that’s where I wanted to go when I was younger.”

That commitment came to fruition on Wednesday as Palladino signed a national letter-of-intent to play for the Rams.

The offer from Fordham became an even bigger opportunity for Palladino who spent most of his senior season injured.

“I had Division I teams looking at me that wanted me and to see what I would do my senior year. (Due to the injury) I wasn’t getting any more offers. Fordham kept beside me and was with me the whole way and told me I wasn’t going to lose my scholarship which was a blessing because that doesn’t happen,” said Palladino.

“I went on a visit and I liked the campus and I like the coaches. I like everything about the university. It was pretty much locked it in for me.”

As a junior, Palladino carried 195 times for 1,552 yards — an almost 8 yards per carry average — and scored 18 touchdowns. He was named the Southeast District Division V Offensive Player of the Year and was named first team All-Ohio.

But Palladino was nagged by a back injury last season and played only one full game and a few plays in a handful of games. He finished with 227 yards on 51 attempts for a 4.5 average and a touchdown.

Vass was happy for Palladino and the chance to play college football after a disappointing senior year.

“It’s a good opportunity for him so hopefully everything works out for him. He’s a talented kid. Once you get in college it’s a step up with the time and the work. At that level everything is amplified. He has the ability to play at that level,” said Vass.

The 5-foot-10, 195-pound Palladino is expected to play behind Chase Edmonds who was the Patriot League Offensive Player of the Year this past season as a sophomore.

Palladino said his injury is still healing and if it does not heal by the beginning of the season he could face a red-shirt year.

“In the Patriot League you can’t just red-shirt for developmental reasons. You have to red-shirt for an injury that lets you out for the whole year. If I were to play, I would have to try my best to get on the field,” said Palladino.

Fordham was 9-3 last season and was second in the Patriot League after winning the title the previous year.

However, the Rams qualified for a third straight NCAA FCS playoff berth only to lose 50-20 to UT-Chattanooga.

Rams’ head coach Joe Moorhead resigned at the end of season to take a position on the Penn State staff.

Palladino said the coaching change did not influence his decision.

“I’m getting to know coach Breiner more. I’m not really glad that I didn’t know (Moorhead), but it’s OK I didn’t know him because I would be iffy on me going.”

Palladino is undecided on a major at this time but he said academics played a major role in his decision to attend the Catholic private school.

D’Angelo is the son of Latisha Palladino and acknowledged the support and help he’s had from his uncle Stacey Jones.

Jim Walker jim.walker@irontontribune.com   Ironton came into the game unbeaten and Wheelersburg connected with a few arrows, but the Lady... read more