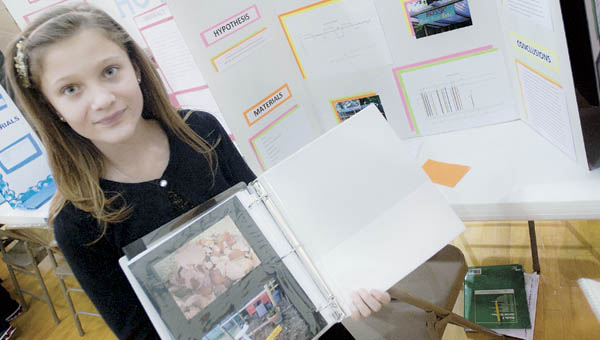 Baise said the fair is mandatory for all fifth graders and that, starting November, the school devoted one class session per week to break down the process of doing a project, with the projects coming together in the past few weeks.

He said the scientific method allows students to fully comprehend science, and is applicable to other fields.

“They can use it any time they face a problem in life,” he said.

One of the students, Alyssa Burcham, had been raising chickens for months in anticipation of the fair, building a chicken coup in her back yard.

“My problem is about egg production and how egg farmers like me can improve chickens’ egg laying,” she said.

She studied how supplementing the chickens’ food would affect the eggs and their weight.

However, she learned that, in the case of her brood, it did not lead to improvements, as the three chickens began to molt.

“They used the calcium and protein for feathers,” she said.

Burcham said she enjoyed doing the project and playing with and feeding the chickens.

For one week, Furrey and her mother had a diet consisting solely of healthy organic foods and things such strawberries, steak and chicken, while her two brothers did the opposite.

“My brothers eat ice cream after breakfast, lunch and dinner, anyway” she said. “So we let them eat whatever they wanted for the week.”

She found her results matched her hypothesis, with her brothers experiencing effects such as headaches, skin issues, moodiness, aches and low energy that she and her mother did not.

Brooke Spurlock also did a food-based project, seeing if there was a difference in generic and name brand microwave popcorn.

She tested a bag of Orville Redenbacher popcorn against a generic store brand.

Both were put in the microwave for the same amount of time, but, contrary to her expectations, she found that the generic bag had better results, leaving fewer unpopped kernels.

Spurlock said she had a good experience with the fair and is eager to try again.

“I’ll probably do it once more in middle school and once in high school,” she said.

Winners from the school’s fair will go on to the district fair at Shawnee State later this month.

We all see it each day of our lives in some form or another. It doesn’t discriminate and will rear... read more