Payne at home with Rio Grande 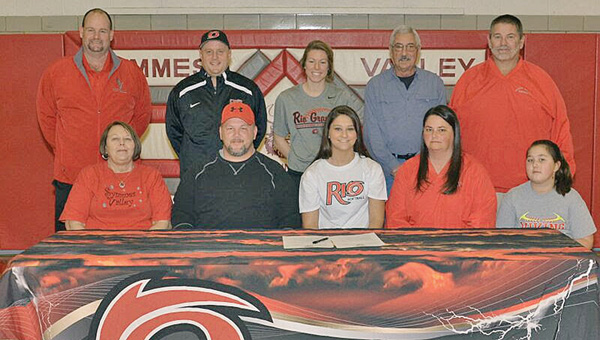 WILLOW WOOD — For Kaitlyn Payne, it’ll be a home away from home.

The Symmes Valley Lady Vikings’ senior softball standout found a lot of similarities between her high school and the University of Rio Grande.

Those similarities were the keys to her signing to play next fall with the RedStorm on Thursday.

“(Rio coaches are) looking at me at both places, but I’ll be a middle infielder and a backup pitcher if they need me,” said Payne.

“It’s nerve-racking but exciting all at the same time. It’s hard to capture everything at once. I think I’m pretty ready to start working out with them. It was always a dream for me to play college ball. I got on the recruiting side a little late. I’m just glad that I’ve still got an opportunity to go.”

Rio Grande head coach Chris Hammond was an assistant at Portsmouth Clay, a member of the Southern Ohio Conference like Symmes Valley. He remembers playing against Payne when she was a sophomore.

“I can remember how talented she was. (Basketball) coach (Ken) French said there was a girl from Symmes Valley and right off the bat I remembered Kaitlyn Payne. So we sent some emails and I made some phone calls to see if she was going anywhere and she was still undecided,” said Hammond.

Payne plans to major in nursing which is one of the stronger programs at Rio Grande.

“She’ll be a very nice fit for our team. The one thing I take from her is the academics and how she wants to be a nurse. I put her with one of our nursing students on the team where she got to listen hands-on how it is to be a student-athletic and going into nursing because it is a challenge,” said Hammond.

Payne has been a first team selection All-Southern Conference, all-district, All-Ohio underclassman team and All-Ohio all three years. She was the SOC Player of the Year in each of the past two seasons.

Lady Vikings’ head coach Jeff “Odie” Estep had nothing but praise for Payne.

“As a player she’s been a standout. She’s been All-Ohio three years in a row. She’s a very hard worker, she gets everything done she needs to get done on the field and off the field,” said Estep.

“I’ve been here 24 years and she’s been one of better players I’ve had the opportunity to coach. Going to Rio Grande I think she can be an impact player her freshman year. She had a lot of opportunities to go other places but she liked Rio Grande the best. As far as her skills, I think she can walk on the field next year and be a player.”

Kaitlyn is the daughter of Shannon and Erin Payne.