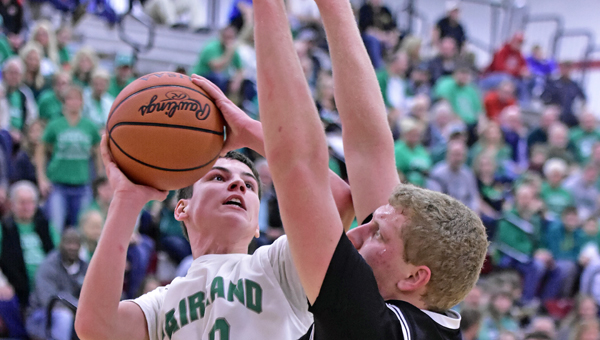 Fairland Dragons’ Gunner Short (52) scores inside against Oak Hill’s Dennis Fleming (50) during the Division III sectional finals on Friday. Fairland won 52-47 and will play in the district semifinals next Sunday in Athens. (Kent Sanborn of Southern Ohio Sports Photos)

Fortunately, they had learned enough during the regular season to pass the test.

Fairland (19-4) led by as many as 16 points in the second half and 13 in the fourth quarter but needed some clutch foul shots by Ty Staten with five seconds left to seal the win.

“I think we got too laid back. We kept thinking put ‘em away, put ‘em away, but (Oak Hill) fought hard and stayed in the game. We had some silly turnovers at some big times, just uncharacteristic of what we’ve done,” said Fairland coach Nathan Speed.

“This is the first time getting there you know it’s not going to be easy especially against coach (Norm) Persin. A young team handling that pressure in this type of game even with the big games we’ve played in this year was tough, but we made plays when we needed to down the stretch.”

Oak Hill (13-11) made some plays to get back in the game. The Oaks went 4-of-7 from the 3-point line in the fourth quarter including one by Cody Swann with 46 seconds to go after a steal of an inbound pass by Mitchell Hale.

The Dragons had six of their 14 turnovers in the fourth quarter.

Hale had a second steal and launched a 3-pointer that rattled around the rim and popped out that would have tied the game. Staten was then fouled and hit his clutch free throws.

“Overall we did a good job defensively. We had some breakdowns there at the end. I think again it came down to us thinking it’s over. We just weren’t really focused defensively. They’re a really disciplined team. One breakdown and they can knock it down.”

The biggest statistic difference came at the foul line. Fairland was 16-of-23 with Kollin Van Horn going 7-for-10 while Oak Hill was 4-of-6.

“Van Horn is the difference in there. He does so much on the defensive end plus the offensive end. He just does so many great things for their team. He makes it tough for us to score in the paint,” said Persin.

The lead changed hands four times in the first quarter with a 3-pointer by Landon Carroll putting the Oaks up 13-12 to end the quarter.

But Fairland outscored Oak Hill 11-3 in the second quarter to take a 23-16 halftime lead. The Oaks were just 1-of-10 from the field in the quarter and missed all five 3-point attempts.

“We went stone cold in the second quarter and then we started to shoot too quick. We didn’t hit much in the third and then in the fourth we got hot again,” said Persin.

“We took away their transition game. We did a good job there. We didn’t let them kill us on the boards.”

The Oaks got within 33-25 on a layup by Dennis Fleming with 4:03 on the third quarter clock, but a putback by Isaiah Howell gave Fairland its biggest lead at 41-25 with 1:40 left.

Carroll’s trifecta and layup made it 41-30 to end the quarter.

But Swann hit three 3-pointers and Hale was 3-of-4 at the foul line as Oak Hill got within three and setting up Staten’s clutch free throws.

Fairland will play Adena at 2 p.m. on Sunday, Feb. 28, at the Ohio University Convocation Center in the district semifinals. Adena beat Westfall 59-52.

The Symmes Valley Local School District will have a special meeting at 9 a.m. Saturday in the superintendent’s office at... read more