Reds’ starting rotation won’t be ready to start on time 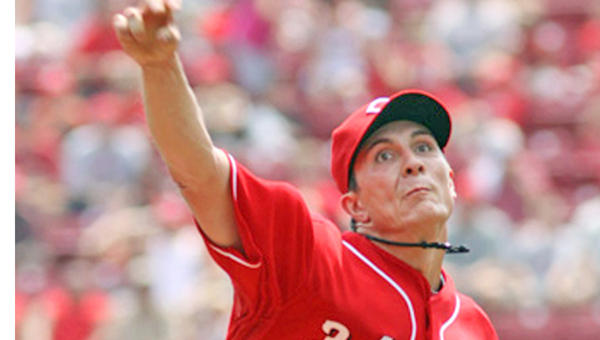 GOODYEAR, Ariz. (AP) — Already facing a rebuilding year, the Reds’ best starting rotation will not be ready to start the season.

Raisel Iglesias, Homer Bailey and John Lamb are behind everyone else.

Bailey, 29, is coming off his second surgery in two years. While he appears ready, Cincinnati is taking it slowly.

“Homer looks great. There are no inhibitions,” manager Bryan Price said. “You could say he looks ready but we’re not going to do that.”

Iglesias didn’t pitch after September 13 with right shoulder fatigue. The Reds delayed the start of his offseason workout to allow more rest. Iglesias, signed as an international free agent out of Cuba, is expected to be ready to start the season.

Lamb had surgery to repair a bulging disk in his back. He was 1-5 with a 5.80 ERA in 10 starts after being aquired from Kansas City in the trade for Johnny Cueto, along with Cody Reed and Brandon Finnegan.

Lamb’s results came as he managed his back issues.

“I would imagine it certainly played a role,” Price said. “We determined that an epidural would satisfy the problem. No one saw that it would require a surgical procedure to get him back to where he needed to be.”

Lamb appeared at Redsfest in Cincinnati in early December and had surgery shortly thereafter.

“He is absolutely in the mix for the starting rotation,” Price said. “He is a much better pitcher than he showed in his short time with us.”

Lamb said he felt like he was able to compete.

“I felt good enough to do so,” Lamb said. “I could have felt better at the end but there was nothing physically telling me not to do it.”

The only given for the rotation at this point is Anthony DeSclafani.

— Finnegan, who was 2-2 with a 4.18 ERA in four starts for the Reds at the end of the season but also worked out of the bullpen last season for Kansas City and the Reds.

— Reed, 22, who rose rapidly in the minor leagues beginning at Single-A Wilmington and finished the season at Double-A Pensacola. Combined, Reed had a 13-9 record in 23 starts. After the trade, he fashioned a 2.17 ERA and was 6-2 for Pensacola.

— Jon Moscot, who also had surgery but on his not throwing shoulder. His injury was caused in a rundown on June 15. The Reds’ fourth round pick in 2012 was 7-1 when the Reds called him up. Moscot made three starts before he dislocated his left shoulder.

— Robert Stephenson, the Reds top draft choice in the 2011 draft. Stephenson made strides throughout the Reds’ farm system that are more important than his 8-11 record in 25 starts at Pensacola and Louisville.

“Stephenson added a quality changeup and not just a pitch to show, it is a put-away pitch,” Price said. “This is the longest look I will have of him.”

— Tim Melville, 26, who completed his seventh minor league season in the Detroit Tigers organization. He has a 31-54 record in 136 minor league starts. Melville will get a shot at the Reds’ rotation this spring.

— Jonathan Sanchez, a veteran who was signed to a minor league contract last month. Sanchez, who owns a no-hitter in his big league career, spent last season at Triple-A Iowa in the Cubs system. This winter, he earned the Comeback Player of the Year award in the Puerto Rican Winter League under Reds Double-A manager Pat Kelly. The Reds will give Sanchez a chance to win the major league award if he makes the team.