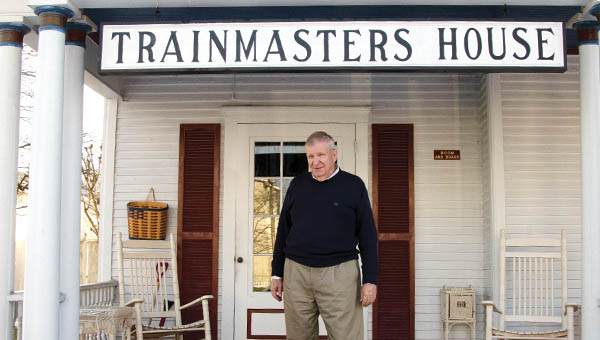 Tim Hensley, proprietor of the Trainmaster’s House bed and breakfast in Kenova, is seen on his home’s porch.

Tim Hensley of Kenova describes himself growing up as a “trainstruck small boy.”

The industry runs in his family, with both of his grandfathers having worked in railroads.

He served as a locomotive engineer, and, due to his background in journalism, became the public relations representative for the Brotherhood of Local Engineers. Eventually, he rose to the position of resident vice president for CSX Transportation in West Virginia.

Now retired, Hensley, 66, runs the Trainmaster’s House, a bed and breakfast, based in his home on Chestnut Street in Kenova.

In addition to being a bed and breakfast, the home, built in 1907, serves as a sort of museum to the Norfolk and Western Railway, which, headquartered in Norfolk, Virginia, was famous for its steam locomotives and ran through several states, including West Virginia, Ohio and Kentucky.

Each room of the house is filled with furnishings and artifacts related to the railroad industry. Hensley is a member of the West Virginia Bed and Breakfast Association and is the only bed and breakfast operating in the Tri-State area.

The home, in sight of the Norfolk and Western main line, once served as the home for two of the company’s trainmasters – Dick Nelson, who resided there from 1918-1925 and William Workman, who lived there into the 1950s.

Hensley, who grew up in Kenova before moving to Huntington, said he purchased the home in 1984. He began extensive work on the residence, restoring it to its original glory. Since his retirement in 2014, he has operated it as a bed and breakfast.

After passing through the foyer, visitors are greeted by a collection of vintage tin advertising signs from businesses like Sunbeam bread and Sherwin Williams, dating from the 1900s to 1940s.

Then, coming into the kitchen, one can see that Hensley has restored the original tin ceiling of the room.

“I’ve put a lot of money into this house,” he said, noting the work he has done in each room.

The living room hosts a collection of railroad lanterns and oilers, many with the engineer’s names inscribed on them.

“It was a mark of pride to have their name on it,” he said, showing one that belonged to E.W. Adams, an engineer from Roanoke.

Hensley said his grandfather was killed while working for the railroad in 1922. He was in possession of his lantern, damaged in the accident.

But, after losing it, he sought a replacement for it, which led him to seek out more lanterns.

“It got me started collecting,” he said.

Upstairs, the home has three bedrooms for guests. The first is a feminine-themed room, decorated with items from Hensley’s family. The second is a Marshall University football-themed room. Hensley said he is a big fan of the school’s athletics and has decked the room out in MU memorabilia, including a poster for the film “We Are Marshall.”

The third, Mr. Carter’s room, once used by William T. Carter, a Norfolk and Western engineer and close friend of Hensley, who died in 1988 at the age of 101.

Hensley said he met Carter in college and interviewed him extensively over the years about the history of Norfolk and Western.

Many of the items there pertain to his career, including his overalls, which hang in the corner. Carter was a boarder the 1920s.

“The call boy would throw pebbles at the window to wake him,” he said.

The second floor hosts the offices of Hensley’s company, Pocahontas Productions, where he writes books, along with business partner Ken Miller, about the history of the railroad industry.

He said his interest in trains dates back to his childhood.

“Norfolk and Western was one of the last steam railroads in the country,” he said. “It had steam until I was 11. I have a lot of memories of it.”

The floor also holds Agent’s Telegraph Office, which Hensley has constructed as a replica, complete with vintage equipment.

He made sure to get the counters, window and table accurate in their heights.

“Everything in this room is Norfolk and Western standard,” he said.

Throughout the house, visitors can find mementos of Hensley’s career, such as large photos of his serving as engineer and taking a train across the New River at Hawk’s Nest State Park, or a wall dedicated to the 1996 visit of President Bill Clinton’s train visit to Huntington, for which he served as the primary contact in the region for the White House. He also has a large collection of coal industry items, such as a canary cage from the mines.

Hensley said he does most of the routine work for the bed and breakfast, himself, such as stripping beds and cooking.

“I make a mean asparagus and crab omelet,” he said. “It’s my specialty.”

Other dishes he offers are stewed tomatoes, biscuits and steel-cut oats with Appalachian maple syrup.

He also gets help from his daughters and, four times a year, has people come in to help give the home a heavy duty cleaning.

He said most visitors come for a one or-two-day stay, mostly from the upscale “wine and cheese crowd” or fellow railroad enthusiasts. His peak business is in the summer and fall months.

The home has appeared on an episode of FOX’s Antiques Roadshow and he hosted the president of Norfolk Southern.

As someone well versed in local history, Hensley often gives visitors a tour of the area, pointing out local attractions. He said many are interested in the history of Marshall football, due in large part to the film.

“I could give a Chamber of Commerce spiel about what we have here,” he said.

He said he’s had visitors from across the country and he recently had a request from a woman who wants to have her wedding at his home.