Bruce anxious to get started 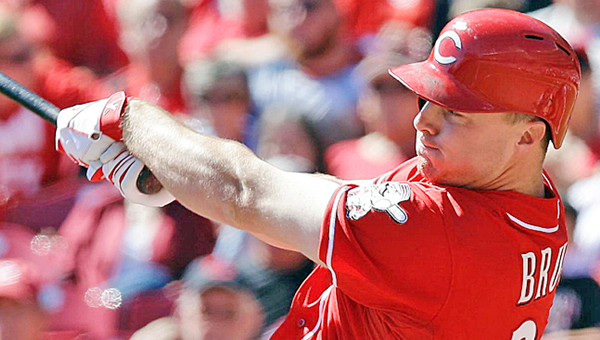 Cincinnati outfielder Jay Bruce reported two days early to the Reds’ spring training camp on Sunday. Bruce wants to return to his hitting form prior to the past two seasons. (Photo Courtesy of The Cincinnati Reds.com)

GOODYEAR, Ariz. (AP) — Outfielder Jay Bruce reported to Reds camp on Sunday. It was a surprise that he was two days early — and that he was still on Cincinnati’s roster at all.

It was no secret the veteran was on the trading block during the offseason.

In his 11th spring training and his 12th year of professional baseball, Bruce has been through the complete cycle of building and rebuilding. Many expected him to be traded for prospects, but instead he walked into a clubhouse filled with young players who are part of another rebuilding plan.

Bruce, who turns 29 in April, and the Reds avoided arbitration when they agreed on a six-year contract after the 2010 season. This is the last year of that contract. The Reds have an option for 2017 which they are not expected to use after Bruce completes his eighth full season in the majors.

“I’ve said all along that if I would have played better the last year and a half, two years, I would have already been traded. I’m honest with myself,” Bruce said. “I know good and well that I’m not the player last year and 2014. The only way I can prove that is to go out and actually do it and get back to the real me.”

His .217 batting average in 2014 and .226 batting average last year with strikeout totals of 149 and 145 caused his trade value to plummet. He also had surgery to repair a torn meniscus in his left knee in May 2014. He returned after two weeks, perhaps too soon.

Bruce strolled into the clubhouse and began to introduce himself to the many players he had never met. Even with the trade rumors fueling the expectations that he would not be in camp, Bruce was in the familiar surroundings for him.

“I tried my best not to think about it (being traded). Until I walk out on the field opening day as a member of the Cincinnati Reds, who knows what will happen? But I’m a Red until I’m not,” Bruce said.

“It’s business as usual for me. It comes with the territory. I try to deal with that as professionally as possible. This is all I know. It’s an interesting time for the franchise. It’s been a long time since we’ve been in the rebuilding process. I look forward to getting started and being a part of this thing. It would be awkward if this was another franchise that I was walking into,” he said.

Manager Bryan Price believes that Bruce has value and something to prove.

“Jay is a highly motivated professional,” Price said. “I think he’s motivated beyond his own personal situation. I think he’s been really disappointed in his last two years. He had a productive year last year.”

“His batting average wasn’t where he wanted it to be but his home runs (26) and RBI (87) were back up to what we expect of him. He still played outstanding defense and stole a few bases. I don’t think his best years are behind him by any means, he said.

Iglesias adapting to baseball in USA