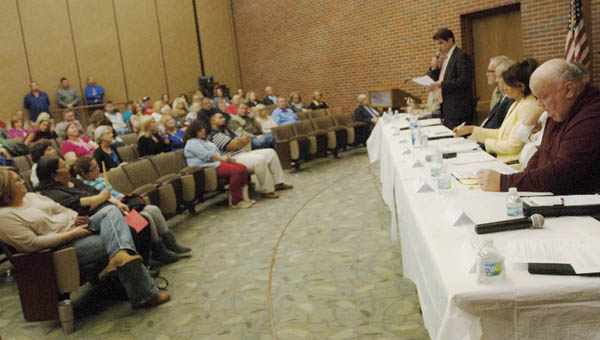 Jobs, the jail crisis and the drug epidemic were the major issues facing Lawrence County said the candidates seeking two spots on Lawrence County Commission in the primary and general election.

It was a packed house at Ohio University Southern on Tuesday night as the AFSCME union that represents the department of job and family services sponsored its first political forum.

“We hear about all the candidates and wonder what they stand for,” Belinda Brown, union president, told the audience.

The union’s answer was to ask the candidates themselves, she said.

Former Mayor Rich Blankenship, who is running against incumbent Les Boggs and candidate Christopher Collins in the GOP primary, cited his 18 years of experience in public service, including work with children’s services, Ironton councilman and mayor.

“My vision is of a leader who has the experience and working knowledge to produce positive results,” he said. “I have many contacts with state and federal offices. I believe I can contact them at any time. I got $20 million in grants for Ironton’s infrastructure improvements, which attract new businesses. We need to unify our county. We do see it divided.”

Boggs said while he has been on the commission, there have been 25 major accomplishments, including turning the county’s finances around.

Boggs also cited the No. 1 priority as needing a new jail in the county without raising taxes.

“It can be done,” he said adding that he will unveil a plan shortly to do that.

He also said the Port of South Point has great potential for bringing in new jobs.”

Collins, who like Blankenship, hopes to unseat Boggs in the Republican primary, said his work as a page and legislative aide in the General Assembly, is one of his major qualifications.

“It truly enlightened me to the change in our state to make government more effective, to take a creative, conservative approach,” he said. “I see firsthand the struggle our citizens go through. The drug epidemic must be addressed, law enforcement is properly funded, secure grants to fund rehab facilities. More jobs and industry. Good jobs where people can prosper.”

Democrat Tim Edwards, who is after incumbent Bill Pratt’s seat, said life experience is a big factor in deciding who should be commissioner.

“People who vote are the leaders,” he said. “Listen to the people. The highest priority is the jail. We have to start healing. We have to fix what’s broke.”

Jon Ferguson, also a Democrat running against Edwards, Jason Tolliver and Doug Malone, cited what he called his well-rounded background that qualifies him as a leader, including starting Ironton aLive to market the city and develop new businesses.

“The jail situation is the top priority in the county,” he said.

He also wants to attract entrepreneurs who would bring jobs for Lawrence Countians, instead of relocating businesses that bring in their own employees.

“The drug epidemic is an absolute drain on the economy, society, families,” he said. “We have the resources.”

DeAnna Holliday, who is facing no opposition in her Democratic primary, wants to unseat Boggs in November.

“Good leadership starts from within,” she said. “I have the ability to empower to do the job. I have a vision for our county. We can become abundant with jobs.”

She also said the jail issue was a top priority to make the county feel safe.

“We need to recover jobs in our county,” she said.

He called himself a populist Republican.

“A man of action. A man of accountability, so you are treated fairly,” he said. “Accessibility. You can get a hold of me. Run the county like a for profit business.”

He also said he would create 100 jobs in his first 100 days in office.

He also cited his being on the commission when St. Mary’s Medical Center-Ironton Campus was created.

He said the casino revenue could help fund a new jail.

However, Pratt, who could face Malone in November, said that wasn’t reasonable since the county can’t count on casino revenue. Like the others, he said the jail was one of the top priorities for the county.

He called himself someone who was consistently conservative.

Also after Pratt’s job on the Democratic side is Jason Tolliver, who said running his construction company gave him the expertise to create a viable business plan. He manages up to 600 employees and increased sales revenue from $20 million to $40 million.

“I have the ability to bring business into the area,” he said. “I can sell Lawrence County to industry.”

The primary is March 15.