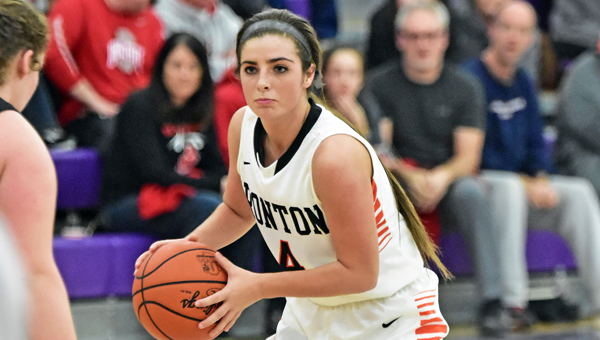 LOGAN — It appeared the plan was to limit the scoring of Lexie Barrier and try to take away Sydney Webb and hope no one threw a monkey wrench into the scheme.

Ironton’s 5-foot-7 senior guard helped foil the Alexander Lady Spartans defensive plans as she scored a season-high 11 points and the Lady Fighting Tigers came away with a 54-48 win in the Division III regional semifinals on Wednesday at Logan High School.

Barrier was double- and sometimes triple-teamed while several players took turns shadowing Webb around the court, especially after her fast start as she scored seven first quarter points.

Barrier still had a game-high 25 points to go with 10 rebounds and five steals, but it was Hannan’s offense that gave Ironton a boost.

“You have to step up in big games. I had to have confidence and thank goodness I knocked down my shots and they had to guard me, too,” said Hannan who leads the team in field goal percentage.

Ironton (26-0) will now play West Lafayette Ridgewood (20-7) at 1:30 p.m. on Saturday in the regional championship game at Logan. Ridgewood beat Lynchburg-Clay 74-54 in the second game.

“I knew this would be a dogfight and I warned our players. You don’t get to the regionals unless you’re a good team,” said Ironton coach Doug Graham.

“They pushed us, but we had players who stepped up and made some clutch plays in key situations. You don’t always play you’re best, especially under tournament pressure, but good teams dig down and find a way to win and our girls did that. I’m really proud of their effort.”

Ironton won a regular season meeting between the two teams 67-33. Hannan admitted the Lady Tigers were not mentally ready for Alexander’s gritty effort.

Alexander (16-9) came out hard and fast by taking a 7-2 lead. Leah Richardson had nine points in the first quarter including a 3-pointer that put the Lady Spartans up 18-15.

Barrier’s layup got Ironton within 18-17 as the quarter ended.

Two foul shots by Barrier were followed by Hannan’s baseline shot and layup as Ironton took a 25-20 lead.

Richardson’s 3-point play cut the lead to 25-24 but Hannan’s layup of a nice pass by Cheyenne Scott made it 27-24 at the break.

A triple by Richardson tied the game to begin the third quarter. Scott followed up her own shot, Lexie Wise made a foul shots and Barrier scored six straight points for a 35-27 lead.

But Alexander continue to battle back an a short jumper by Richardson just before the buzzer made it 37-34.

Hannan drained a 3-pointer to begin the fourth quarter for the first clutch play of the period.

Alexander began to foul with 5:30 to play but the plan backfired. A missed foul shot on a one-and-one was rebounded by Scott who scored for a 42-35 lead.

Moments later Barrier duplicated the play with her own putback of a missed three throw and the lead was 46-35 with 4:33 to play.

Ironton had a chance to put the game away for good but could only connect on 5-of-10 free throw attempts over the final 1:34.

A layup by Richardson with five seconds to play capped the scoring.

“We didn’t shoot bad from the foul line, but we needed to make a few more down the stretch. We still made enough to win and in the tournament the name of the game is to win and move on. You don’t get style points,” said Graham.

Saturday’s winner advances to the state tournament at 3 p.m. on Thursday, March 10, at the Ohio State University Schottenstein Center.

Jim Walker jim.walker@irontontribune.com   LOGAN — The West Lafayette Ridgewood Lady Generals’ talented two were too much for the Lynchburg... read more