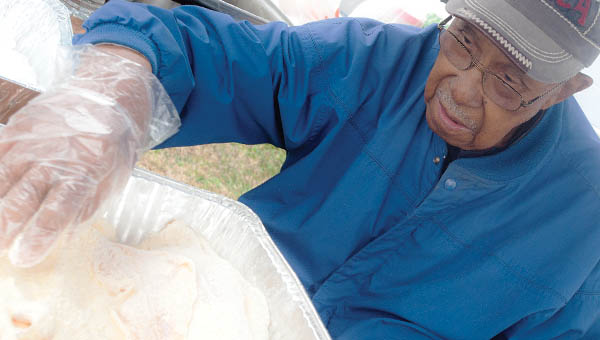 The canola oil was bubbling in the fryer and the politicians were electioneering in the dining room. That can mean only one thing. It’s the semi annual Quinn Chapel fish fry.

On Saturday just before noon Myron Cofer was manning the fryer in the front yard of the church waiting for the oil to heat up to 350 degrees. Then he carefully placed five white fish filets generously coated in flour, corn meal and Zatarain seasoning to the fryer.

In four minutes the first batch of fish was hot and ready. He would do that all afternoon until all 70 pounds of fish were fried up.

Inside the women of the church were dishing up cole slaw and baked beans waiting for the first fish.

In the sanctuary of the church Wilma Fox, one of the oldest members of Quinn Chapel, was telling its history.

Named for William Paul Quinn, one of the earliest bishops in AME history, the first congregation met in 1856 in the home of Arthur Harwell. Two years later the first church was built for $300. In 1865 the congregation bought the land where the church is now from Ironton founder John Campbell and built a new building at a cost of $1,000.

Then in 1909 the current structure with its elaborate stained glass windows and oak interior was built.

ATHENS — There’s something about the Convo that brings out the best in the Chesapeake Panthers. The hot-shooting Panthers played... read more