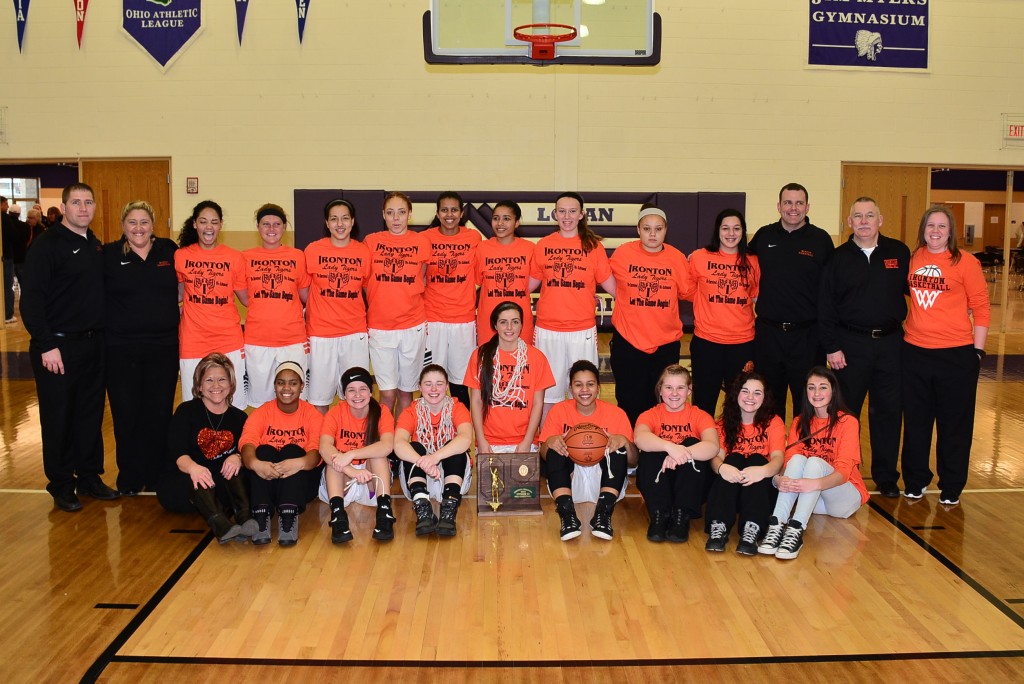 Ironton allowed just one 3-point goal over the final 10:46 of the game and put together one of the greatest comebacks in the program’s lore as the Lady Fighting Tigers rallied to beat the West Lafayette Ridgewood Lady Generals 46-43 in the Division III regional championship game on Saturday at Logan High School.

Ironton’s All-Ohio standout Lexie Barrier — drawing triple team coverage the entire game — scored seven of her 11 points in the comeback. She said the plan was simple.
“We need to make a run. We need to get stops. Everything in my head was just keep the team going,” said Barrier.

“It was definitely really physical. (Ridgewood) is really, really good, but somehow we found a way to fight back and come up with a win. That’s all I was really worried about, however we could do it.”
Ironton (27-0) will now play Columbus Africentric (22-5) in the state semifinals at 3 p.m. on Thursday at the Ohio State University Schottenstein Center.
Africentric beat Metamora Evergreen 59-54.

Ironton coach Doug Graham said all the credit went to the players who lived up to their nickname.

“All the credit goes to those girl in those Ironton jerseys. When things looked bleak, they battled and persevered. I’m very, very proud of them. I’m proud to be a Fighting Tiger,” said Graham.

“It was a complete team effort. That’s what good teams do. Good teams step up when needed and I feel a lot of girls stepped up and played well from the starters to the bench minutes. Coach (Mark) LaFon says it all the time. We’re Fighting Tigers, not Tigers, we’re Fighting Tigers. My girls displayed that tonight.”

After a putback by Erinn Buchanan at the 2:46 mark of the third quarter put Ridgewood up 40-26, Ironton’s defense went to work.

“She’s good. Our game plan going in was to keep (the ball) out of her hands. She runs the offense. Lexie Wise and Alyssa Lewis and everyone else helped out and did an awesome job on her,” said Ironton’s Jordan Hannan.

Ridgewood (20-8) was just 1-of-9 from the field in the fourth quarter and finished the game 17-for-46 despite shooting 13-for-25 in the second and third quarters combined.

“We knew going in that defense was going to be a big key. (Tingle) did a phenomenal job. She was taking it to the basket and finding ways to get her team open,” said Wise.

Ironton went on a 7-0 run to end the quarter as Barrier scored six points.

Wise and Sydney Webb made layups, Barrier hit two foul shots and then her layup with four minutes to play gave Ironton the lead at 41-40.

Cheyenne Scott was fouled getting an offensive rebound and hit two free throws for a 43-40 lead.

A 3-pointer by Morgan McDorman tied the game with 2:15 left. After trading turnovers, Barrier was fouled and made the first of two shots with nine seconds left for a 44-43 lead.
Hannan got the offensive rebound on the missed second attempt and got the ball to Scott who was fouled with three seconds left.

Scott made both free throws and a long halfcourt attempt by Autumn Brown hit the top of the backboard to end the game.

“We said give them one attempt but make it difficult,” said Graham. “Ridgewood was a good team and they played hard. I thought our girls played hard and we played well. Other than a couple of dead spots in the second and third quarter, we played well against a good team.”

Scott said she tried to block out the pressure but it was difficult.

“Coach Graham tells us every day in practice it’s going to come to this in the game. It was unbelievable. I was so scared. I didn’t know what to do and then I hit those free throws and I’ve never been so excited in my life,” said Scott.

Ironton went on a 6-0 run to start the game before a 3–pointer by Ridgewood’s Autumn Brown.
After the Lady Generals got within 8-7, Sydney Webb drained a trifecta and a steal by Lexie Wise who fed Webb for a layup made it 13-7.

“I was feeling it. They weren’t actually on me as hard as other teams. The pressure was rough, especially the second half but I just kept shooting,” said Webb who led Ironton with 13 points.

Kaitlyn Finton had a layup with 10 seconds left in the quarter to cut Ironton’s lead to 13-9.

Lewis made a 19-footer and Webb knocked down another triple as Ironton took its biggest lead of the half at 20-13 with 4:26 left in the half.

But two quick calls on Barrier sent her to the bench and Ridgewood used her absence to cut the lead to 23-22.

A loose ball left Eliza Haynes alone under the basket and she made a layup and a long inbounds pass to Finton led to another layup and Ridgewood led 26-23 at intermission.