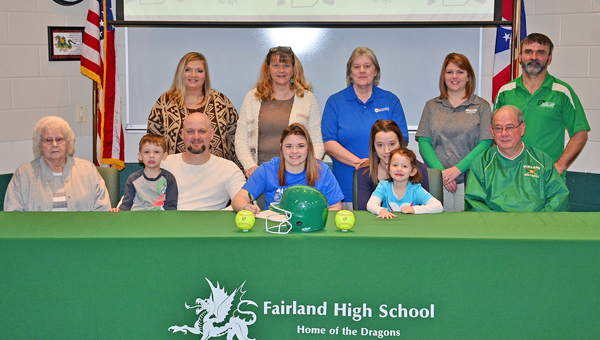 PROCTORVILLE — Softball has been a big part of Allison Shepherd’s life and she wants to keep it that way as long as she can.

The Fairland Lady Dragons senior standout said she has been playing softball since the second grade and when the chance to keep playing came her way, she clutched it like catching a fly ball.

“I’ve always known that I wanted to (play college softball) because it would be weird if I didn’t play in college. I don’t do anything else. I really don’t. I go to school and then I go to softball,” said Shepherd after signing on Friday to play at Alice Lloyd College.

“I’m excited. It’s awesome when you get a chance to go to the next level and play and get a great education like I’m going to. I’m overwhelmed.”

Shepherd said she visited Alice Lloyd in Pippa Passes, Ky., and fell in love with the campus.

“They have a great facility and an awesome school. There’s not that many people so you get one-on-one time,” said Shepherd.

“I got free tuition for when I go. I like it because it’s like here. It’s not big and I get a chance to be like home when I’m there. That was the first school I visited and I liked it better than anybody else.”

The Lady Eagles’ first-year head coach Nathan Hall said Shepherd caught his eye when she attended one of the program’s recruiting workout days.

“She came up to one of my recruit days and I really liked how she played and we went from there. She’s a really good athlete. She’ll play anywhere. I don’t know where she’ll end up on my field,” said Hall.

“Right now we’re building a program. We have one senior and one sophomore and 13 freshmen. She’ll play.”

Hall said there is a strong possibility that Shepherd will play in the field when she isn’t pitching.

“She’s a really good hitter. She hits for power a lot of times and I like having a lefty up there. That’s what makes me happy,” said Hall.

Shepherd said she is open to pitching and/or playing the field.

“I usually pitch, but I can play anywhere. I’ve always played anywhere so it’s normal,” said Shepherd. “I like to pitch more than I like to play anywhere else. It’s more comfortable there.”

Shepherd plans to major in English and also get a real estate license to use for summer work.

Ohio gets by Miami