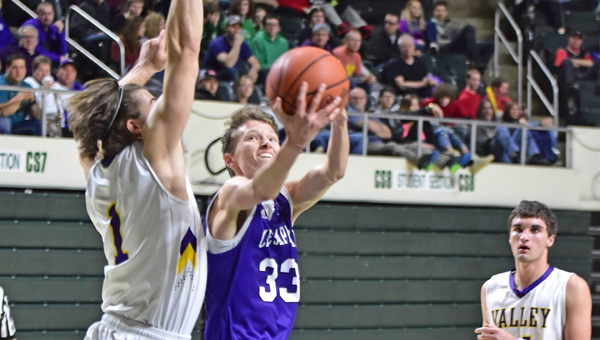 Chesapeake Panthers’ head coach Ryan Davis got to see the Lynchburg-Clay Mustangs up close in the district tournament and he came away shaking his head.

“It was good for us to see them here (at Athens) because we can compare their length and their speed and athleticism against guys we know and it’s kind of scary,” said Davis.

Chesapeake and Lynchburg-Clay will meet at 6:15 p.m. on Wednesday in the Division III regional semifinals at Ohio University’s Convocation Center.

The Mustangs rallied in the second half of the Division III district finals to beat Fairland 73-62. Chesapeake lost twice to Fairland during the regular season. Both teams are members of the Ohio Valley Conference.

Lynchburg-Clay (23-2) is led by 6-foot-1 senior Devin Pierson. The first team all-district player led the team with a 19.6 scoring average.

Also in double figures are 6-4 sophomore Eric McLaughlin and 6-3 junior Joe Giordano. Both averaged 12.5 points a game and were third team all-district.

Pierson had 23 points and Giordano 21 in the district finals. Top reserves Christian Inman — a 6-2 senior — scored 12 points off the bench in the win over Fairland.

“Not only physically are they impressive, but then they can play,” said Davis.

“It seemed like they went on runs the whole game and it was somebody different every time. Their kids are standing there like ‘it’s his turn,’ and they would go for seven, eight points each. It’ll be kind of a daunting task.”

Chesapeake (19-6) played well in its district title game win over over Lucasville Valley.

Leading the Panthers is two-time first team Southeast All-District selection Gage Rhoades with a 20.6 scoring average. Rhoades was the Southeast District 13 Coaches’ Player of the Year and the North/south All-Star Game representative.

In the district finals, Stevens was 6-of-6 from the field and scored 16 points.

The second game at 8 p.m. matches Marion Pleasant (15-11) and Sugarcreek Garaway (23-3). Wednesday’s winners meet on Saturday in the regional title game at a time to be announced.