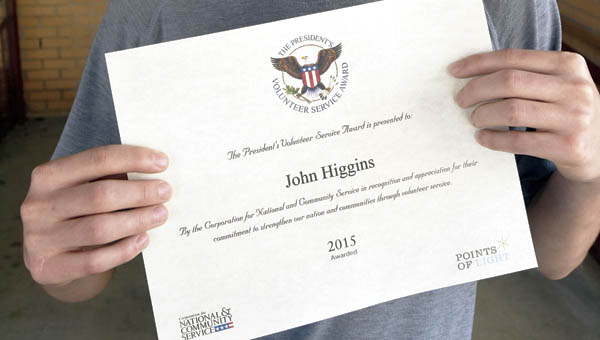 SYMMES VALLEY — Ninth Grader John Higgins, of Willow Wood, said he has been doing volunteer work at the Lawrence County Museum in Ironton for about three years.

“I go in every weekend and give tours,” the Symmes Valley High student said.

Higgins was drawn to the 16-room local history museum because of his love of history while in the seventh grade. He said his favorite of the museum’s rooms is the one dedicated to World War II.

Recently, Higgins was recognized for his volunteer work by the White House with the President’s Volunteer Service Award.

The award, granted on behalf of President Barack Obama by the Prudential Spirit of Community Awards Program, is given to Americans who have volunteered a significant amount of time to their communities.

Higgins said he received a letter from Obama and a certificate to mark the honor. He was nominated for the award by the high school.

“We are very pleased that John has been recognized with this award, which is a testament to his character and a reflection of how he has been raised,” Symmes Valley Principal John Bowman said. “Students like John are a shining example of exceptional character and doing things the Viking way.”

Higgins, who plays football and is on the school’s Quiz Bowl team, history has always been a favorite subject in school. He plans to pursue it as a minor in college, but plans to major in a field with more job opportunities.

The Prudential Spirit of Community Awards are sponsored by Prudential Financial in partnership with the National Association of Secondary School Principals and recognize middle school level and high school students across America for outstanding volunteer service.

“The recipients of these awards demonstrate that young people across America are making remarkable contributions to the health and vitality of their communities,” said John Strangfeld, the chairman and CEO of Prudential Financial, said in a news release. “By recognizing these students and placing a spotlight on their volunteer activities, we hope to motivate others to consider how they can also contribute to their community.”

Talks continue on new facility The Lawrence County Jail is getting a step closer to hiring a new physician. Recently... read more