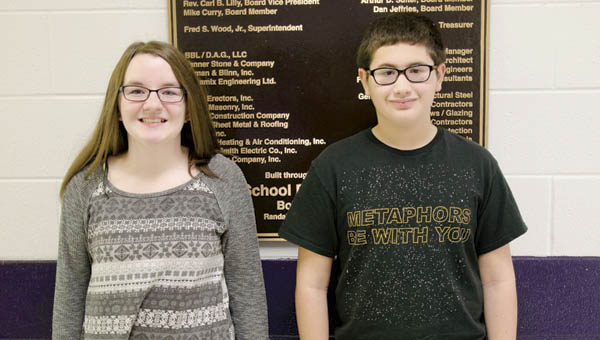 ATHENS — The regional spelling bee is set for Saturday in Athens, and two returning Lawrence champions and two newcomers are set to take part in the competition.

The Ohio University’s Scripps College of Communication Region I bee will feature 55 spellers from grades four through eight across southern Ohio, and will take place in the Ohio University Baker University Student Center. To participate in the event, students had to be a school winner and take an online test, attaining a score of 25 or higher.

Chesapeake Middle School eighth grader Emily Neal is no stranger to the event, having competed at the regional level before and placing second in 2014.

Neal, who was born deaf and is able to communicate with the aid of a Cochlear implant, is now in her last year of eligibility to compete. She won this year’s county bee by correctly spelling “macramé.”

“Yeah, I’m ready,” Neal said of the weekend ahead.

She said has been studying lists of words, broken down by language of origin.

She has already amassed an impressive list of accomplishments, but she said she hasn’t decided what she wants to do for a career.

“Maybe an engineer, or a lawyer,” she said.

Another returning competitor is Holli Leep, 13, of Proctorville, an eighth grader at Fairland Middle School, who was runner-up this year at the county level.

She took the top spot in the Lawrence bee last year and went on to place second at the regional level. She also placed second at the county in 2014.

Leep is deeply involved in activities at her school. She’s a cheerleader, plays softball, is in the Fuel Up to Play 60 exercise program, serves on student council and is a member of the National Junior Honor Society.

This will be her third try in Athens and, like Neal, she’s been going over the lists of words that will be used, with help from her mother, who teaches at Fairland West Elementary.

“My mom has been doing them verbally with me,” she said. “And sometimes, for fun, she’ll pour sugar out on the table and I’ll spell the words out with that. And sometimes I use a wipe board.”

Leep said the bee repeats the list of words in certain years and that makes it easier to study for the competition.

New to regional bee is Chesapeake Middle’s John Tyler, though he’s carrying on the family tradition.

His mother is Neal’s older sister, and the sixth grader will be joining his aunt in Athens for his first try at that level.

Tyler said, like Neal, he’s ready, and has been going over the various lists, having studied words of Greek, Slavic, Italian, Latin and other origins.

“I’ve been studying every single day,” he said.

He said he’s undecided about his future path, but has considered the legal profession.

The youngest speller from Lawrence County this year is Olivia Kingrey, 9, a fourth grader at Dawson Bryant Elementary, who qualified for the regional in her first year of eligibility.

She has had a similar routine to the others these last few weeks.

“I’ve been doing lists of words each day,” she said. “They have them on the website.”

Kingrey, who place fifth at this year’s county bee, plays softball and basketball in Coal Grove.

She said she wants to attend Marshall University and to someday be a veterinarian.

The winner of the regional bee will go on to compete in the national bee. The last Lawrence County student to do so was Felicity Jenkins, now a senior at Symmes Valley High, who went to D.C. in the sixth grade back in 2010.

Julie Walters, the student service coordinator of the Lawrence Educational Service Center, who organizes the annual county bee, said she wishes all of the spellers “the best of luck.”

“I have just been so impressed with all of these students, especially Emily Neal, as I’ve gotten to know her,” she said. “She amazes me. They all amaze me. I have the utmost confidence in all of them.”

Defense refutes prosecution’s case “Pay me or pay God.” Those were the last words Justin Adams heard before he was... read more