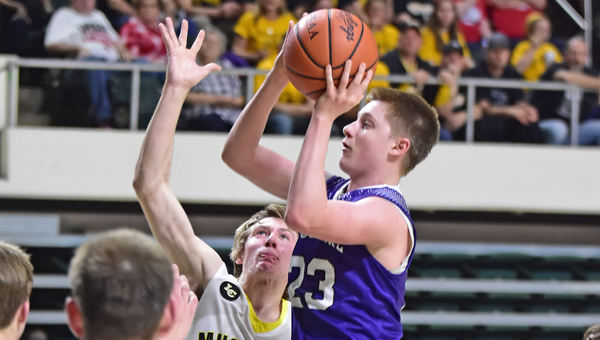 Gage Rhoades has been on the first team his entire Chesapeake career. Now he’s on another first team.

A first team Southeast Ohio All-District selection the past two season, Rhoades added the All-Ohio first team to his resume as he leads six area players honored by the AP.

Rhoades — the District 13 Coaches’ Player of the Year and North/South representative — averaged 20.6 points, 2.9 rebounds and 2.2 assists as he helped the Panthers to the Division III regional semifinals.

Van Horn averaged 14.6 points, 10.4 rebounds and 3.7 blocked shots as the Dragons won the Ohio Valley Conference. He was a first team all-district selection.

Kratzenberg battled through a shoulder injury to average 12.4 points, 2.4 rebounds, 2.0 assists and 1.5 steals a game.

Meadows was a double-double man in most of his games this season as he averaged 15.4 points and 12.5 rebounds. He shot 59 percent from the field.

Thomas was the Dragons’ top 3-point shooter as he averaged 13.0 points, 3.1 rebounds and 3.1 assists per game.

Kratzenberg, Meadows, Thomas and Fox were all second team all-district.

COLUMBUS (AP) — Jaquan Lyle and Marc Loving both had 18 points with career-high rebounds and Ohio State dominated in... read more