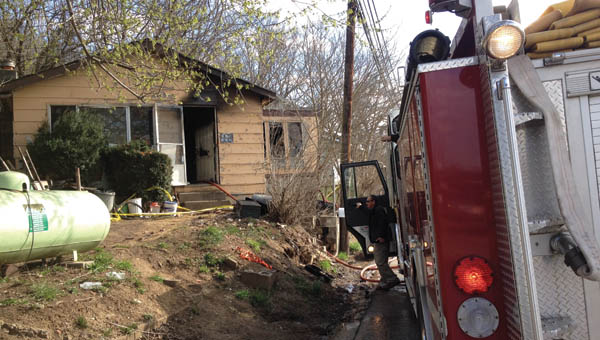 Crews work on the scene following a fire at 508 Rockwood Avenue.

The home, located at 508 Rockwood Avenue, was a total loss, following the blaze, which was reported at about 8:05 a.m. by a passing motorist.

A man and woman living at the home escaped with no injuries, Capt. Brian Corns, with the Chesapeake Fire Department, said.

We arrived on the scene and flames were shooting through the roof,” Cross aid.

Garladean Thompson, who resided at the home, said she deep asleep when she was awakened by the fire at about 8 a.m.

Chesapeake Fire Chief Ed Webb said the call came at the height of the morning’s school traffic. Both of the residents were out of the house when crews arrived.

The road was shut down completely as crews battled the blaze, which was extinguished by 9 a.m. The road was open to one lane of traffic by 10 a.m., as some firefighters remained on the scene to take care of any remaining hot spots, while Thompson watched from a folding chair in front of her next door neighbor’s home.

Corns said the cause of the fire was still unknown, pending an investigation by the fire marshal, though Webb described it as a “classic electrical fire.”

Webb said the house could be described as “a hoarder’s house,” and was congested with belongings.

“That’s so dangerous for the firemen, if you do have to go in and rescue someone,” he said.

The Red Cross will be stepping in to help out the victims of the fire, to provide temporary housing and needed items, Webb said.

The American Red Cross in Portsmouth, which handles the region, will be providing assistance and recovery planning.