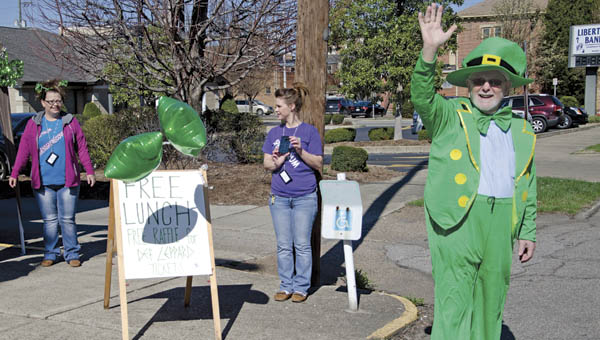 Bob Vinson of Spectrum Outreach waves to passers-by to promote a free lunch and awareness-raising event at the drug and alcohol treatment center in Ironton on Thursday.

Drivers on Fourth Street in Ironton were turning their heads on Thursday, as they noticed a leprechaun waving to passing traffic.

Bob Vinson, of Spectrum Outreach Services, donned the costume to attract attention to the free lunch the alcohol and drug recovery program was offering at their facility.

Vinson said the St. Patrick’s Day event was to raise awareness of drug and alcohol issues.

“In the past two weeks, we’ve had two overdoses on heroin. They both died on the same night,” he said. “We need sobriety and for people to get clean and sober.”

Spectrum offers treatment and recovery services, with two locations in South Point and one in Ironton.

“We want everyone to know what we do here,” Vinson said.

Kathy Ross, the site manager for resident rehabilitation, said they were trying to educate the general public on addiction.

“The more people who are educated, the better off we’re going to be,” she said.

Those who stopped by the free lunch of a hot dog and chips could pick up literature on drug and alcohol addiction and treatment. The facility was also entering people into a raffle to win two tickets to see Def Leppard at the Big Sandy Superstore Arena in Huntington.

Vinson said people passing by might have thought he looked odd in his outfit, but he believes raising awareness is worth it.

WASHINGTON — U.S. Sen. Sherrod Brown, D-Ohio, introduced legislation into the Senate on Wednesday that he says will protect for... read more