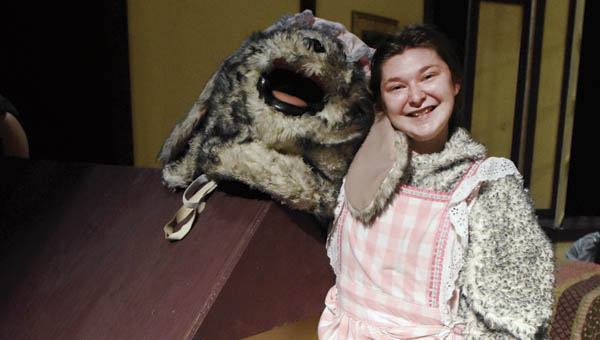 Ironton High School student Hannah Tussey stands next to her doghouse and in character as Nana in the production of Peter Pan at the Paramount Arts Center.

Hannah Tussey was just in fourth grade when she found her passion, and she has been following it every since.

“I was 9 and saw an ad for Tom Sawyer production,” said Hannah who got the part of Alice, one of the younger children.

Right after that she had a chance to perform in a school production of “The Sound of Music,” which she did for a special reason.

“’The Sound of Music’ is one of my mom’s favorites,” she said. “I don’t do sports so I thought I’d do something for my mom. I got hooked.”

Now the Ironton High School junior is a mainstay of the Ashland-based Paramount Players, who are putting on a production of the Broadway musical, “Peter Pan” this weekend, complete with a professional company that will fly the main characters.

Friday and Saturday night Hannah will bring to life one of the beloved characters of the show — Nana the sheep dog who plays nanny to the Darling children.

“It is a bundle of fun,” said Hannah, who has had not only to rehearse on all fours, but fine-tune her barking skills.

“It’s more like a cough than anything,” she said. “It’s been more of a challenge.”

And although she has been performing for a while, there’s a little bit of stage fright before a performance. But Hannah uses that to her advantage.

“The nerves push you to do better,” she said. “But it is exhilarating to be on stage. You are no longer yourself and can put your personal problems behind you and perform like you’ve never done before.”

“She is a very good student of the theater and puts a lot of heart and soul into what she does,” Whaley said. “The way she embraces her role speaks volume about her passion for the theater. Being in dance and theater you really appreciate those students.”

During the summer, when she is not performing, Hannah volunteers with the Paramount’s art academy classes, which could lead her down a career path.

“I want to go into theater and help students like me find their niche in the arts,” she said.