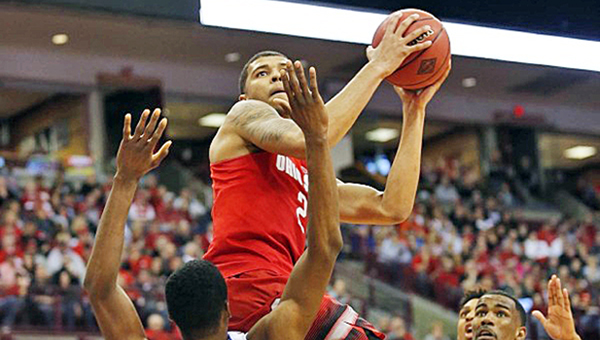 Ohio State Buckeyes’ Marc Loving (2) drives through the Florida defense to score during Sunday’s NIT second round game. Loving scored 20 points but it wasn’t enough as the Buckeyes lost to the Gators 74-66. (Courtesy of Schilling/Ohio State University.com)

Always bring you’re A-game and bring use it from start to finish.

The Florida Gators used big scoring spurts to start each half as they beat the Buckeyes 74-66 in the second round of the NIT.

“As I told them, I don’t care if we’re playing in the NIT or the NCAA Tournament, the Big Ten or a preseason game, you get off to those kinds of starts it’s hard to play catch up at this level,” said Matta.

“Florida’s guards did a great job controlling the tempo. They knew when to go, when not to go and that was very challenging for us.”

Florida coach Mike White was somewhat surprised by the way his team began each half.

“It’s crazy because we haven’t been quite as sharp the last couple of days in practice or leading into North Florida and the way we started was a bit of a surprise. We got off to a great start and it was much needed with the way the crowd got involved and became a factor in the game,” said White.

Florida (21-14) had four players in double figures. Dorian Finney-Smith had 16 points and 12 rebounds, Kasey Hill and 15 points and five assists, Kevarrius Haynes 14 points and Justin Leon came off the bench to add 12 points and seven rebounds.

JaQuan Lyle had his third career double-double with 19 points and 11 rebounds to lead Ohio State (21-14).

Lyle finished the season with 391 points, ninth best for an Ohio State freshman, and he also had the fourth most assists and sixth most free throws made for a Buckeye rookie.

Marc Loving scored 20 points and Daniel Giddens had a career-high 11 points along with six rebounds off the bench.

Florida scored nine unanswered points to start the game and turned it into a 14-2 run before the Buckeyes — who missed six of their first seven shots — managed a 9-0 run of their own to close the half and draw within 31-30.

But the Gators went on a 16-4 run to begin the second half to lead 47-34 and this time the Buckeyes were unable to recover.

“The start of the second half was really brutal because of the standpoint the turnovers led to easy baskets for them and we got ourselves in that hole,” said Matta.

“I thought we did a great job after the first four minutes after the start of the game. We’re down one at halftime and we’re in pretty good shape.”

Ohio State did manage to get within seven with 4:34 to play, but Finney-Smith hit a 3-pointer with 1:35 to play that opened up a 68-58 Florida lead and the Gators went 6-for-6 at the foul line down the stretch to lock up the win.

“(Ohio State’s) gifts were getting in the paint and creating off the dribble. The plan was to run (Kam) Williams off the line the best we could,” said White.

“Offensively, we wanted to get a bunch of ball movement. (Ohio State) guys are always sound defensively. I thought Kasey (Hill) and Chris (Chiozza) and KeVaughn (Allen) did a really good job getting downhill, getting toward the rim.”

Florida was missing center John Egbunu with a thumb injury. Ohio State was without starting forward Keita Bates-Diop for the second straight game. Matta said after the game he was diagnosed on Friday with mononucleosis and the team got the report on Saturday.

The Buckeyes were already without Jae’Sean Tate who suffered a season-ending shoulder injury several weeks ago.

“Today was really magnified not having (Jae’Sean Tate) and (Keita Bates-Diop) out there. Not making excuses. We played with what we had, but a couple of veteran guys out there obviously helps your team,” said Matta.

Florida will play the Monmouth-George Washington winner on Wednesday.

Ohio State finished 21-14 and Matta said his youthful squad played with inconsistency all season but did play well to close out the season.

“We won, with the exception of Michigan State and Florida, we won all the last games out of 10 or 11, whatever it was. I don’t know if I can completely answer because we didn’t finish the season with everybody that we had,” said Matta whose teams have won 20 games in each of his 16 seasons as a head coach.

“There’s no question about that. There were some strides made. We knew this was going to be a challenging season. Hopefully, our guys have a sense about what college basketball is about now. You can’t just show up and play. I’m going to get my game on just doesn’t work that way. There’s an element of needing each other. There’s an element of coachability. The hardest part is just the inconsistency that we had. Is that youth? I don’t know but we’ve got to get that corrected.”

NEW YORK (AP) — Upset in the NCAA Tournament the last couple of years, No. 2 seed Villanova and its... read more