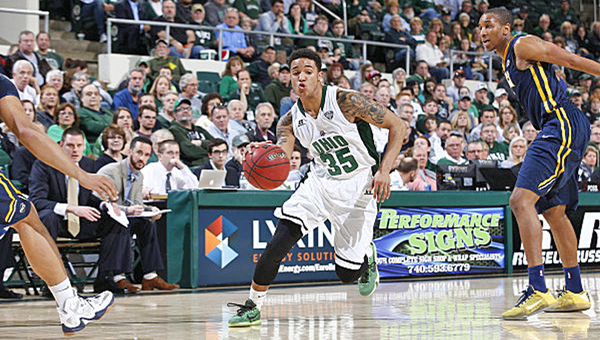 Ohio Bobcats guard Jordan Dartis (35) takes the ball up the court against UNC-Greensboro during Monday’s CBI Tournament at Ohio University’s Convocation Center. The Bobcats rallied in the second half to win 72-67 and will play at home on Thursday in the semifinals against Morehead State. (Calvin Mattheis/Ohio University Athletics)

ATHENS — The explanation was a lot easier than the shot.

Freshman Jordan Dartis hit a fall away 3-pointer with 24 seconds to play that completed a second half comeback and lifted the Ohio Bobcats over the UNC-Greensboro Spartans 72-67 on Monday in the CBI quarterfinals.

“It went in. I just hit a good shot. That’s really it,” Dartis said of his clutch basket. “It was a tough shot and it just went in.”

Antonio Campbell made two foul shots with 1:16 to play that got Ohio even at 67. The Spartans missed a layup on their next possession.

The Bobcats worked the ball and Dartis fought off a double team to hit his trifecta from the right wing and Ohio led 70-67 with 24 seconds on the clock.

UNCG missed another layup and Jaaron Simmons got the rebound for Ohio and was fouled. He made both free throws with 14 seconds left to settle the outcome.

“I think it’s pretty clear that deep down in their hearts this team really wants it,” said Ohio coach Saul Phillips.

The Bobcats who will now host Morehead State at 7 pm. in the semifinals on Wednesday. The Eagles (21-12) beat Duquesne 82-72 behind 17 points by Brent Arrington.

Campbell had a monster game with 17 points and 19 rebounds — 17 on the defensive end. Dartis finished with 14 points while Treg Setty had 12 points and six rebounds.

Campbell and Simmons then led a 15-2 comeback run as they combined for baskets on six of Ohio’s next seven possessions to trail 64-62 with 3:18 to go.