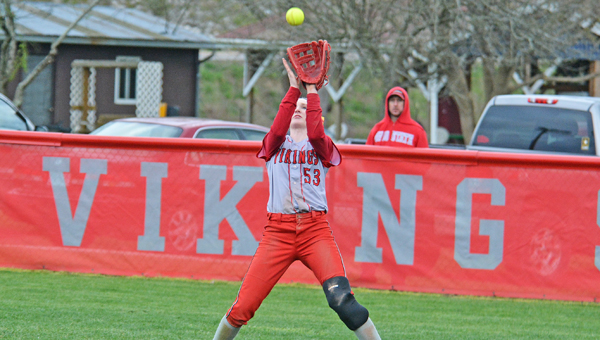 Symmes Valley Lady Vikings’ outfielder Taylor Webb hauls in a catch for an out during an 11-1 win Monday. (Robert S. Stevens & The Gold Studio of Ironton)

The Lady Vikings used good pitching, hitting and defense to win their third straight by blanking the Chesapeake Lady Panthers 11-0 in five innings on Monday.

Sarah Kingery pitched a 3-hitter to get the win. She fanned two and walked two.

Taylor Webb was 2-3 with a triple and three runs batted in while Hannah Mays was 2-3 with an RBI to lead the Symmes Valley 10-hit attack.

“It was another nice outing by Kingery, the defense played well behind heer and our offense had another good day,” said Lady Vikings’ coach Jeff “Odie” Estep.

Sierra Ross doubled to start the game and Webb singled her home. Webb went to second on an error, stole third, Kaitlyn Payne walked, stole second and both moved up on a wild pitch. Tiara Hatfield grounded out as Payne scored.

The Lady Vikings put together a 6-run second inning to lead 9-0.

Hannah Mays singled, stole second and took third on a wild pitch. Kaitlyn Crabtree walked and stole second, Ross was safe on an error for a run and Webb tripled to drive in two more runs.

Payne doubled for an RBI, Hatfield singled, stole second and Kingery singled for a run. Carpenter capped the rally with an RBI single.

The Lady Vikings capped the scoring with two runs in the fourth.

Hatfield reached on an error, moved up on a fielder’s choice and Carpenter was safe on an outfield error for a run. Mays singled home the final run.

Jim Walker jim.walker@irontontribune.com   The Ironton Fighting Tigers are off to a good start. Knock on wood. Wood bats, that... read more