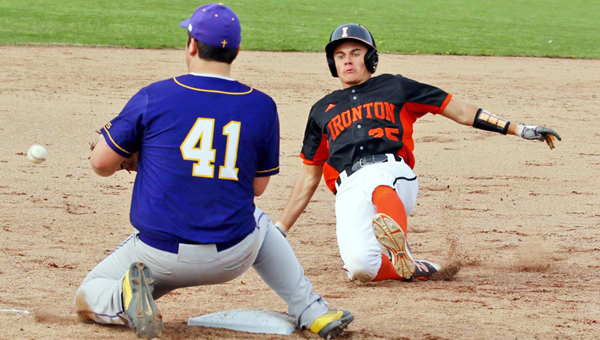 On a scale of one to 10, the Ironton Fighting Tigers decided to go 10 to one.

Ironton scored 10 runs in the first inning en route to a 12-2 win over the St. Joseph Flyers on Wednesday.

“We came out and hit the ball real well the first inning to get the early lead,” said Ironton coach Larry Goodwin.

“Cody Rawlins pitched well. He was very efficient. He averaged 16.8 pitches per inning only two walks and six strikeouts.”

Rawlins struck out six, walked two and gave up three hits in five innings to get the win.

Ironton (3-0) had 11 hits with Dane Wilson going 3-for-3 with a triple and four runs batted in while Garrett Carrico was 2-3 with a double.

Chase Walters, Peyton Adkins and Seth Kelly were all 1-2 for the Flyers (0-2).

Wilson began the big first inning with a single. Jake Isaac then walked and Carrico had an RBI double.

Hunter Klaiber was hit by a pitch, Larry Morris grounded out as a run scored and Chase Rowe got an RBI single.

St. Joseph (0-2) got a run in the second inning. Walters reached on a missed third strike, Adkins singled, Brad Rist walked and Kelly’s ground out scored the run.

The Flyers got a run in the top of the fourth when Tyler Ward reached on an error and Walters and Kelly singled.

Ironton answered with two runs in the bottom of the inning. Travis Gayhart, Bryce Thomas and Kleinman all walked and Wilson had a two-run single.

St. Joseph entertains Sciotoville East in a doubleheader at 11 a.m. on Saturday.