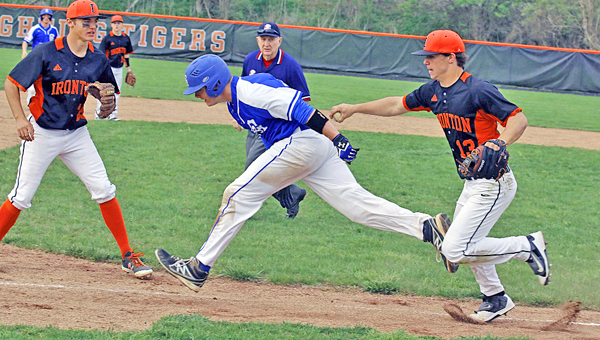 Ironton Fighting Tigers’ pitcher Garrett Carrico (13) tags out a Gallipolis runner during a rundown in Friday’s Ohio Valley Conference game. The game was suspended after seven innings due to darkness with the score tied 5-5. (Tim Gearhart of Tim’s News & Novelties, Park Ave. in Ironton)

Trailing the league favorite right from the start can be demoralizing.

Not to the Ironton Fighting Tigers.

Despite falling behind the Gallipolis Blue Devils 3-0 midway through the game, Ironton bounced back to tie the game and that’s the way it stayed as the teams were deadlocked 5-5 after seven innings due to darkness.

“We opened the game flat and gave up two runs in the top of the first. Our players began to battle and we came back from behind three times during the game,” said Ironton coach Larry Goodwin.

“I’m proud of the team’s effort in the second half of the game. We are showing signs of improving in executing our offense.”

Ironton trailed 2-0 after the first inning and the Blue Devils made it 3-0 in the top of the fifth. But the Fighting Tigers then outscored Gallipolis 5-2 including a run in the bottom of the seventh.

Garrett Carrico went seven innings for Ironton. He struck out four, walked five and four of the runs were earned.

Gallipolis went up 2-0 in the first inning on singles by Kole Carter and Matt Bailey, a double play ball and Ryan Terry’s rbi double.

A run scored in the third on Anthony Sipple’s double and Terry’s one-out single.

Ethan Duncan doubled and went to third when Kyle Kleinman’s sacrifice attempt was misplayed for an error. Dane Wilson singled for a run and a wild pitch scored the second run.

Gallipolis got the run back in the sixth on walks to Jeremy Brumfield and Tanner Allen and singles by Carter and Bailey.

Ironton tied the game in the bottom of the sixth. Hunter Klaiber walked, Larry Morris doubled and Duncan and Kleinman both singled.

The Blue Devils went up again with a run in the top of the seventh. Terry doubled, Brady Simms put down a sacrifice bunt, Brumfield was hit by a pitch and Terry scored on an error.

But Ironton tied the game in the bottom of the inning to force extra innings.

Ironton had eight hits. Wilson was 2-3 while Duncan was 2-4 with a double and an RBI.

The game is expected to be completed April 18 when Ironton visits Gallipolis.

CINCINNATI (AP) —How low will they go? The Reds slid all the way to second-worst in the National League last... read more