Trying to save them all 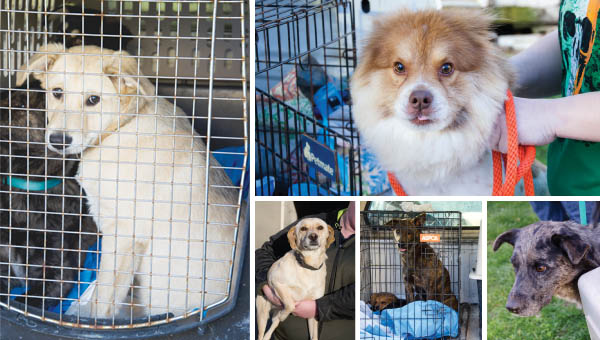 Last year the organization sent 4,189 dogs and cats to rescues, where homes were found for them.

Shelter teams up with rescue groups to find homes

On Thursday morning just as the skies were clouding up Tiffany Wilson was pulling apart blue surgical pads and stuffing them into wire cages stacked up behind the Lawrence County Animal Shelter.

Donated to the shelter, they serve as part puppy pad-part mattress for the dogs soon to be put inside the cages. There would be 25 dogs going to Portsmouth that day.

“We have a heavy load this week,” pound keeper Melissa Nicely said as she was putting Kara, a brown mixed hound, into the back of her truck.

By 9 a.m. the pair with their canine cargo were off to Shawnee Medical Clinic where the dogs would be picked up by a Columbus transport, then taken to rescues as far away as Chicago and Michigan.

In the past few years rescuing animals rather than disposing of them through euthanasia has become the norm. There are close to 500 rescue groups in Ohio including those specializing in certain breeds like Ohio Valley Pembroke Welsh Corgi Club or One Fuzzy Pawz Shih Tzu.

“Rescues have been huge,” Proctorville veterinarian Dr. Mike Dyer has said. “Social media has allowed them to do a good job. The foster network is huge. We thought the low-cost spay and neuter clinics would make a dent in euthanasias, but it didn’t. But these rescue groups have.”

Joining the rescue caravan has been in the past three years the Lawrence County Animal Shelter that once had one of the highest kill rates in the state. But no more.

“It is a great thing,” Nicely said. “Last year we took in 1,400 dogs. Of that 619 went out through rescue. Only 76 had to be euthanized and over half of them were because the owners sought euthanizing.”

“Facebook is the hub,” said Nicely. “We post our pictures and everybody shares with different Facebooks. The groups are in Michigan, Wisconsin, Illinois, Pennsylvania and Maryland. We even had two dogs go to Washington State.”

However, just as all animals that go to rescue must be vetted, so must the organizations to make sure the animals end up with good homes.

Last year the organization sent 4,189 dogs and cats to rescues, where homes were found for them.

“We realized that the population in Ohio was way way too high,” she said. “A lot of dogs would die. We developed a foster program, but that wasn’t meeting the needs.”

Before Aronson teams up with a rescue, she researches it well.

“I have a questionnaire I use and I call other rescues,” she said. “If I am undecided, I do a site visit. We look at longevity. If there is somebody who is just kind of a start-up and are new, I am not that keen on them until they show they have done something.”

She will also check with a local veterinarian or local dog warden.

“The county dog warden can usually tell me a lot,” she said. “I had one warden tell me a particular rescue had been in trouble.”

Stop the Suffering has six regular drivers, one of whom typically meets Nicely at Shawnee.

“Sometimes our driver will go to Ironton, if there are a lot of dogs,” Aronson said.

The Lawrence shelter learned the importance of making certain of the integrity of the rescues they use when they sent a dog down to a Laurel County, Kentucky rescue that this past December was shut down and more than 100 animals were seized.

Homeward Bound Rescue was raided by police for allegedly hoarding and neglecting those dogs.

“We had an old Eskimo that was a bite risk,” Nicely said. “Rather than euthanize her we sent her there. We had gone with a reference check and talked to a bunch of people who had sent animals to her. She came highly recommended and her web page, everything looked really good.”

However that was allegedly not the case, not so much because of deliberate neglect, but she took in more animals than she could take care of, according to Nicely.

“She got in over her head too quickly,” she said. “The court pulled all the dogs but 20.”

One of those 20 was the husky, which that director kept as her personal dog.

The director has pleaded not guilty and the case is still pending.

Typically, rescue groups get on the Facebook page over the weekend to make their selection.

“By Monday or Tuesday I know which ones are going,” she said.

Then on Thursday she and her co-workers load up the van and head for Portsmouth.

Every dog that comes into the shelter immediately gets a 5 in 1 shot by shelter staff.

“You never know which dog a rescuer will pull and it makes dogs healthier,” she said.

With so many rescue groups out there often they specialize in the type of animals they take.

“Some deal with mama dogs and puppies or one might deal with one breed specifically,” Nicely said. “Other ones they will root for the underdog and we thank God for those.”

The sixth annual women’s conference will teach women how to be financially proactive, obtain tips and tricks for healthy eating,... read more