Panthers to honor Harris with naming of track 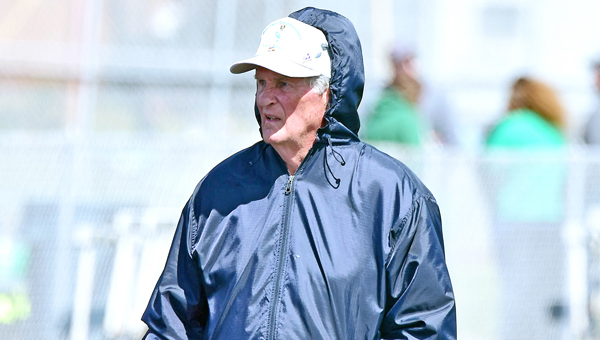 Longtime track coach and official Bob Harris will be honor on Friday at the Chesapeake Lions’ Club Invitational. Chesapeake is going to add Harris to the name of the track along with the late Dave Smith to create the Dave Smith-Bob Harris Track. (Kent Sanborn of Southern Ohio Sports Photos)

CHESAPEAKE — The secret to Bob Harris’ success isn’t much of a secret.

“The secret is you just have to work at it. At the beginning, my boys just worked at it,” said Harris. “It was never work for me.”

All that work paid dividends during his coaching career as well as a track official. Now it will pay off in style as Chesapeake High School adds Harris’ name to that of his mentor Dave Smith as the Panthers’ track will be named the Dave Smith/Bob Harris Track.

The track was originally named for the late Dave Smith who is a Ohio High School Track Coaches’ Association Hall of Fame member. During Friday’s annual Chesapeake Lions’ Club Invitational, the high school will add the name of Harris who himself is a member of the same Hall of Fame.

“I definitely appreciate it very much,” said Harris who will be honored with a ceremony between preliminaries and finals.

Now 78, Harris began teaching and coaching at Chesapeake Junior High after graduating from Rio Grande College in 1957. He helped coach football and basketball and then Dave Smith came to him to help with track.

“Coach Smith had seven kids and one car, so he took them to Fairfield Stadium to practice with Ray McCoy at Huntington High,” said Harris.

“He had one discus thrower and he asked me to work with the kid. His name was Thornburg. All I could do for a while was watch him — I’m kind of a visual person. I began to work with him and he threw 109 feet and won the conference meet.”

What followed was a career that spanned seven decades and saw him coach both boys and girls teams at Chesapeake. He won nine Ohio Valley Conference boys’ track titles between 1963-75 and he won seven OVC girls’ championships in nine seasons.

Harris also coached three state champions — Charlie Wolfe was a two-time winner in the 800 and Steve Wilson won the 400 in 1970. He was inducted into the Hall of Fame in 1981.

Mike Whitley — who had great success as Fairland’s track coach — ran for Smith and Harris at Chesapeake. He said many of the former runners discussed adding his name to the track.

“He took a lot of kids who weren’t stars in other sports and got them into running rack and field and made pretty good track athletes out of them. He’s a good man. It’s not so much about the coaching career as it is about the man.”

Whitley said his first encounter with Smith and Harris was in the sixth grade. He said the two would paint a disc rink on the basketball court and set up hurdles and a long jump pit for practice during recess.

“We had homerooms against homerooms. We ran relays, sprints, laps around the school. They figured out how long it would be a mile. They ran every kid who came through the school,” said Whitley with a laugh.

Harris explained how he fell in love with track.

“I kind of got the bug. I saw kids run and working really had and it just kind of rubbed off on me,” he said.

Harris — went into administration from 1964-65 — also coached 19 seasons of cross country and was an assistant coach to Dennis Brachna at Marshall University from 1989-95.

He returned to Chesapeake to coach throws in 1996 and continued to work in that position until last season.

Barrier, Rhoades to play in pair of all-star games

Jim Walker jim.walker@irontontribune.com   COLUMBUS — There will be plenty of opportunity for star gazing this month. Ironton Lady Fighting... read more