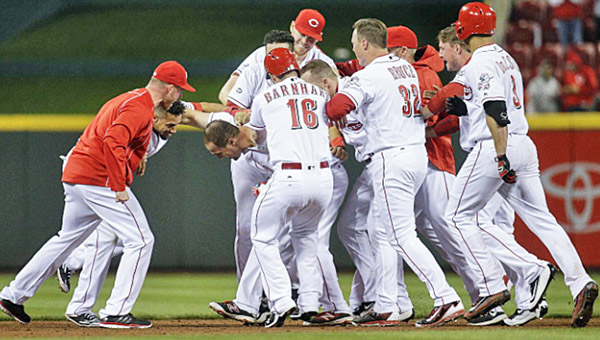 Cincinnati outfielder Scott Schebler is mobbed by teammates after his game-winning double in the bottom of the ninth gave the Reds a 3-2 win over Philadelphia on Wednesday. (Photo Courtesy of The Cincinnati Reds.com)

CINCINNATI (AP) — Scott Schebler hadn’t even put the ball in play all night when he came to bat in the ninth with a chance to script a wild ending.

His double got it done.

After striking out in his first three at-bats, Schebler doubled with the bases loaded and one out in the ninth inning as the Cincinnati Reds took advantage of another meltdown by Philadelphia’s bullpen and rallied to beat the Phillies 3-2 Wednesday night.

Philadelphia wasted a lead in the eighth inning of a 6-2 defeat on opening day. Ahead all the way until the ninth, the Phillies let another one get away.

Trying to hold a 2-1 lead, Dalier Hinojosa (0-1) gave up three singles that loaded the bases with one out. Schebler, acquired from the Dodgers in the three-team deal that sent Todd Frazier to the White Sox in the offseason, doubled to left-center to complete the rally, leaving him with a rush of emotions.

“They’re all over the place,” Schebler said. “I’m extremely happy.”

And cold. Teammates dumped ice water on him during his postgame interview on a blustery, rainy night.

“It was already cold out there,” Schebler said. “That added to it, but it was really great.”

Blake Wood (1-0) pitched one inning for the win, the Reds’ seventh straight over the Phillies at Great American Ball Park. Cincinnati has won 10 of its past 11 against Philadelphia there.

“These close ones are killing me already,” Phillies manager Pete Mackanin said.

Aaron Nola gave up four hits over seven innings on a blustery night, and Maikel Franco added to his impressive springtime with a two-run homer into the wind in the first inning. Nola gave up Eugenio Suarez’s solo homer and matched his career high by fanning eight.

The game started with gusty winds that made the bunting flap wildly. Intermittent rain pelted the players and the crowd of 21,621.

Franco hit a two-run homer into the wind in the first inning off left-hander Brandon Finnegan, one of his few bad pitches. Finnegan — obtained from Kansas City as part of the deal for Johnny Cueto last July — allowed only three hits and a walk in six innings, striking out a career-high nine.

Finnegan struggled at the end of spring training.

“You’re always going to have doubters,” he said. “I tried not to think about it. My goal was just to keep us in the game, and I think I did that.”

Franco’s homer extended his impressive springtime. He hit nine homers and drove in 23 runs during spring training, the most by any player in the majors.

First baseman Joey Votto ran onto the field when his name was called during pregame introductions, making him 1 for 2 this season. He blew off the team’s introduction before the opener on Monday. He said that was on purpose, but wouldn’t say why.

Reds 2B Brandon Phillips was a late scratch from the lineup because of a stomach virus. He’d been slotted to bat cleanup. Devin Mesoraco was moved up to the fourth spot.

Phillies: 1B Ryan Howard was out of the lineup. Mackanin reminded him over the weekend of his plan to sit him against left-handed pitchers. “He said, ‘I don’t like it, but I get it,”’ Mackanin said. “He’s OK with it — not OK with it, but it’s not an issue.”

Reds: RHP Anthony DeSclafani threw the equivalent of three innings of batting practice without a problem, an indication he’ll be able to start on Sunday against the Pirates. DeSclafani missed his anticipated opening day start because of a strained left oblique.

Phillies: RHP Charlie Morton makes his first start for the Phillies, who got him from the Pirates last December for David Whitehead. Morton is 6-7 against Cincinnati.

Reds: RHP Robert Stephenson becomes the seventh Reds pitcher to make his major league debut in the past two seasons. The 23-year-old was Cincinnati’s first pick in the 2011 amateur draft, the 27th overall. He made 11 starts at Triple-A last season.

Jim Walker jim.walker@irontontribune.com   COAL GROVE — To be continued… The game between the Ironton Fighting Tigers and Coal Grove... read more