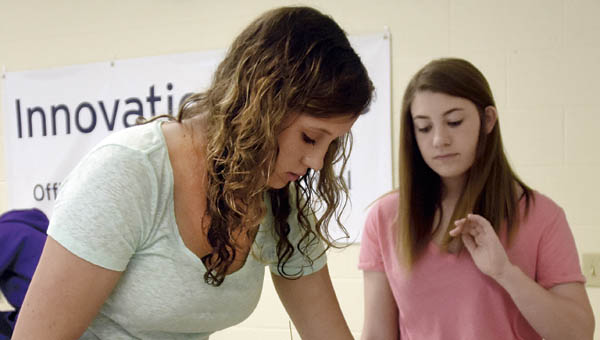 Mary Beth Burton, left, and Malea Delawder, right, work on their project Thursday as part of Project Lead the Way.

Teams, individuals from Project Lead the Way will compete in three fields

Eighth grade students are heading to Columbus on Tuesday to take part in three competitions at the Ohio State Fairgrounds.

The group, comprised of Project Lead the Way students from Chesapeake and Ironton Middle schools, were putting final touches on their projects and exploring ideas at Ironton Middle School on Thursday.

One team from each school will enter the Team Engineering Design Challenge, a statewide competition. The winners will go on to compete at the national level, Matt Monteville, the coordinator for Project Lead the Way, said.

He said the teams have no idea what the project they will compete for will be, but they will be asked to design something for the competition.

As practice, they had tried a few tasks leading into the competition. Monteville said the aim is to get students to work as a team.

“First, we had to build a bridge out of paper,” he said. “And now, their job is to come up with an innovative wallet. Wallets are something that have been around for years. Their job is to make it better.”

“It opens easily, and it has a chip for Wi-Fi,” Shields said. “You don’t need to charge it, but it can charge your phone.”

The group from Ironton, comprised of Mary Beth Burton, Malea Delawder and Riley Shreck, took a different approach, designing a wallet, also with Wi-Fi, but with a removable charging cord that could be charged at home.

In addition to the design teams, Peyton Rove, of Ironton, was working on a speech project she will present in a separate competition.

“It’s based on the Skills USA creed,” Monteville said.

Rounding out the group were Lexi Arnett and M’Kenzi McMasters, of Ironton, who were working on a poster design, based on the theme “I believe in education” for a separate competition.