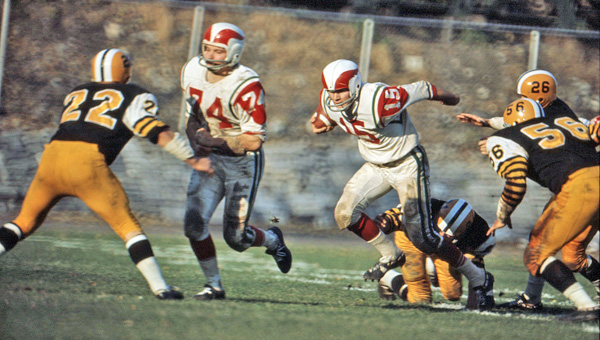 Coal Grove’s Jerry Fields (15) as quarterback of the Montreal Allouettes of the CFL. Fields will be honored by Coal Grove High School at 6 p.m. on Saturday, April 30, for his distinguished football career at Coal Grove, Ohio State and professionally. (Photo Submitted)

COAL GROVE — On Saturday, April 30, Dawson-Bryant High School will host a Distinguished Alumni Event. This event will pay tribute to their most distinguished alumnus.

Jerry Fields — an All-Ohio football standout who played for Ohio State and professionally in the AFL and CFL — will be honored with the alumni event that begins at 6 p.m. in the high school cafeteria.

Several activities are scheduled including some game footage of Fields’ high school and college playing days. There will also be guest speakers, refreshments and a variety of assorted finger pastries.

There is no charge for the event.

One of the best athletes ever produced by Lawrence County, Fields was an all-county player in 1953, a member of the first Ohio Valley Conference championship team in 1954, All-OVC and All-Ohio in 1954-55 and a North/South All-Star Game selection in 1955.

Fields was then recruited by legendary Ohio State football coach Woody Hayes and signed to a full athletic scholarship in 1956.

Freshmen were ineligible to play varsity during that era, but it was the era with no platooning and Fields played quarterback, linebacker and punter the next three seasons.

The Buckeyes were down 14-6 when Fields hit Jim Herbstreit — father of former OSU quarterback and ESPN analyst Kirk — with a 25-yard touchdown pass to make it 14-12 wit 1:47 left in the first half.

Fields hit Don Clark with a 25-yard passed to the Michigan 34 that proved to be the key play in the drive. Dick LeBeau, Bob White and Fields took turns on six rushing plays with White going the final 6 yards for the touchdown.

Fields faked a pass on the conversion and ran for the extra points.

On the next to last play of the game, Michigan’s Brad Myers got to the Ohio State 2-yard line but fumbled when he was hit by Dick Schafrath and Fields recovered.

After his distinguished career at Ohio State, the 6-foot-1, 222-pound Fields was drafted in the 13th round of the NFL draft by the New York Giants in 1961. He appeared to have made the team only to suffer a knee injury and was cut.

Although he failed to make the cut with the Giants, Fields was signed by the New York Titans — now the Jets — and played from 1961-62 in the American Football League.

After the Titans, Fields signed with the Montreal Allouettes of the Canadian Football League in 1963 as a quarterback and linebacker and played in 13 of the team’s 14 games during the 1964 season.

Anyone interested in speaking at the event should contact Dean Mader or Colleen Armstrong at the high school at (740) 532-6345.