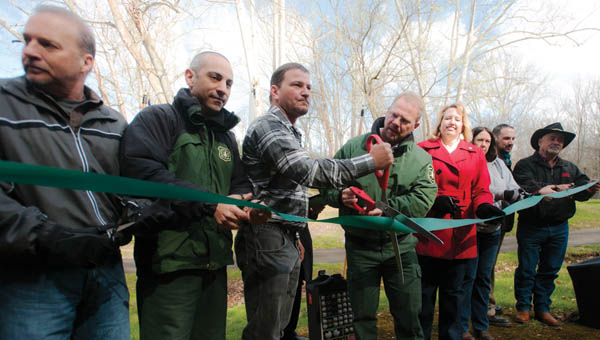 PEDRO — The hard work of volunteers was honored on a cold Friday morning, as the ribbon was cut on a new trail at Wayne National Forest.

About 50 people were on hand for the opening of the Balancing Rock Trail at Lake Vesuvius Recreation Area.

The four-mile trail is part new, and partly comprised from the older Horse Trail at the park and gives hikers a view of several pedestal rock formations. About 600 volunteers worked to prepare the trail for its opening.

The ceremony kicked off with a presentation of colors by the Rock Hill post of VFW Post 2761, AMVETS 141 and American legion 806, followed by the playing of the national anthem by brass players from the Rock Hill High School band.

“God, we thank you for the beautiful rocks you have provided from the foundation of the earth,” Shannon said. “As travelers come from our state, our country and our world to visit Lawrence County and these rocks, may they see your beauty and find the rest they seek.”

Bill Dingus, of the Lawrence County Economic Development Corporation and dean emeritus of Ohio University Southern, served as master of ceremonies for the event. He spoke of the work the volunteers had done.

“You have many, many hours of sweat equity put into this,” he said.

Dingus honored Josh McKenzie, who found the pedestal rocks and came up with the idea for the trail.

“Every great thing has to start with the person with vision,” Dingus said.

“Folks of Lawrence County care very much about their public lands, the environment and holding us accountable to get things done,” he said.

Scardina said the new trail is the third of nine projects planned to improve the Vesuvius system for recreation and tourists.

“It’s a safe, scenic trail people can use for now and for future generations,” he said.

Todd Shelton, a field representative for U.S. Sen. Rob Portman, R-Ohio, was on hand to represent the office.

“It’s a huge driver for economic development,” he said. “On behalf of Sen. Portman, we support these types of projects.”

The office of U.S. Rep. Bill Johnson, R-Ohio, also had a presence at the event.

“We are blessed here in Lawrence County to have the beauty in these formations,” Juli Stephens, Johnson’s field representative, said.

Local officials were represented as well. Les Boggs spoke on behalf of the Lawrence County Commission.

“If you build it, they will come,” Smith said. “God’s got his way of building things.”

The balancing and pedestal rocks on the trail are sedimentary rocks called siltstone, which were formed in the beds of deep lakes and oceans millions of years ago. After the water receded, the land was thrust up. Wind and rain erosion over time removed part of the soft shale stone, causing the formations.

Following the ceremony, refreshments were served and transportation was offered to the rock formations.

Susan White, the president of the Lawrence County chapter of the Ohio Horseman’s Council, invited the public to hike the new trail.

“I would like to extend a special, heartfelt thank you to members of the Elkins Creek Horse Club, Ohio University Southern and the Ohio Horseman’s Council, who provided sweat, blood and sore muscles to build the Balancing Rock Trail,” she said.

Chicks will be added to farm