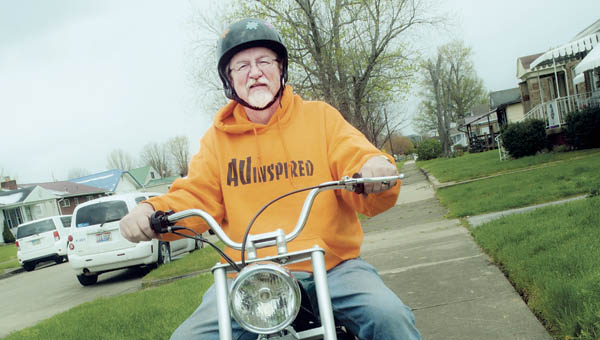 Bill Jordan wants everyone to understand and be aware of the needs of autistic children.

He knows firsthand what it is like to care for a special needs child. His 9-year-old son, Allen, was diagnosed with autism at the age of 3.

“I went to bed one night and thought about doing a ride on a riding lawnmower, just to raise awareness,” he said. “Then I found this mini bike.”

Starting at 8 a.m. on Saturday, April 23, Jordan plans to ride the perimeter of Lawrence County, all 183 miles, on his bike.

The bike will be decorated with the autistic puzzle ribbons, the official symbol of autistic awareness.

Jordan and his wife realized early on there could be a situation with their child.

“He was late in walking,” Jordan said. “He would bang his head, just different things.”

Allen was eventually diagnosed at Nationwide Children’s Hospital in Columbus.

“I thought I caused it,” Jordan said. “It broke my heart.”

Right now Allen is on medication.

“If he is not on it, you will know it,” Jordan said. “He will have his meltdown.”

Otherwise he is a bright child enrolled in the Rock Hill school district who loves reading.

“He is a special little boy,” his father said. “I would do anything for him. We have our good days and we have meltdowns. Then you hold him and love him.”