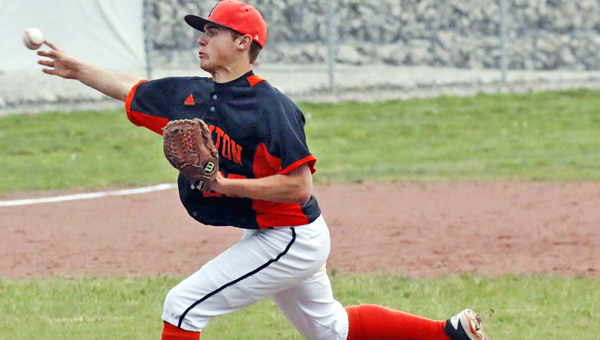 Dane Wilson was the main man on Monday as he pitched a one-hitter and retired 21 of the 23 batters he faced to lead the Ironton Fighting Tigers 2-0 Ohio Valley Conference win over the South Point Pointers.

Wilson struck out seven and did not walk a batter in going the distance. He allowed only two baserunners.

“Dane Wilson pitched a great ballgame tonight,” said Ironton coach Larry Goodwin. “He was very efficient with his 77 pitches over seven innings. Dane was able to get first-pitch strikes on 15 of 23 batters.”

South Point’s Chris Woodard threw well in defeat. He gave up only three hits, struck out six and walked one. Both runs were earned.

Ironton (8-0, 4-0) scored the only two runs of the game in the top of the first inning and Wilson made it stand up.

Wilson walked to start the game, Jake Isaac singled, Garrett Carrico was hit by a pitch to load the bases.

Ironton’s only other hit was a single by Kyle Kleinman in the second inning.

South Point’s lone hit was a single by Douglas Shaffer leading off in the bottom of the first inning.

Wilson retired the next 11 batters before an error allowed Logan Wade to reach with two outs in the fourth inning.

But Wilson set down the next 10 batters in a row to end the game.

“The defense played well. Carrico, (Chase) Rowe and (Hunter) Klaiber each made nice plays in the field,” said Goodwin.

“Woodard pitched well for South Point. We were able to manufacture two runs from the three hits he yielded.”